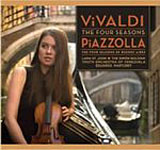 Canadian cum American violinist Lara St. John is a classical maverick without peer. The scintillating Bach of her youth, Bach: Works for Solo Violin (Well Tempered Productions, 1996), gave way a decade later to her fully mature Bach of The Six Sonatas & Partitas for Violin Solo (Ancalagon, 2007), and then to diamond-splendid Hindson, Corigliano, and Liszt (Hindson: Violin Concerto; Corigliano: Suite from the Red Violin, Ancalagon, 2008). A creatively restless spirit, St. John returns to the fold with a classic pairing of Antonio Vivaldi's Le Quattro Stagioni (The Four Seasons) with Astor Piazzolla's Argentinian translation of the same, Las Cuatro Estacionces Portenas (The Four Seasons of Buenos Aires), as realized by Leonid Desyatnikov. We are fortunate to have such a fertile young talent to express these two disparate musical views.

Vivaldi's Four Seasons was composed as the opening four violin concertos of his collection of twelve concertos, Op. 8, entitled Il cimento dell'armonia e dell'inventione (The Contest between Harmony and Invention), first published in 1725. Ever the multi-media maven, Vivaldi prepared the four concertos to be matched with four sonnets, each celebrating one of the four seasons. This was an early form of program music; that is, music written with a temporal program in mind. In the Four Seasons, Vivaldi has dogs barking, birds tweeting, and ice storms freezing. Vivaldi's Seasons anticipated Beethoven's Sixth Symphony(The Pastoral) and Berlioz's Symphonie Fantastique.

What St. John brings to these much-loved and recorded concertos is warmth. With much of the '90s and '00s devoted to period instrument and performance standards for Vivaldi's music, giving that music a somewhat harsh and cold beauty, St. John throws open the windows, rips down the drapes, and issues a definitive modern set. St. John's 1779 "Salabue" Guadagnini instrument has a deep honey-mahogany in the low and midrange, well-suited for the Summer and Fall suites, and a bright even high register for Winter and Spring. St. John's precise Baroque modulations, well crafted by her Bach performances, are exercised here.

St. John and her 200-plus year-old fiddle easily modulate from the moderate climes of Italy to the humid, sensual ones of the "Paris of the West," Buenos Aires. Astor Piazzolla did not set out to compose a set of juxtaposing Four Seasons. In 1965, he composed "Verano Porteno" ("Buenos Aires Summer") as part of his music for the play Melenita de oro by Alberto Rodriguez Munoz. It was not until 1970 that Piazzolla provided the other three seasons, and then 1999 for Russian composer Leonid Desyatnikov to arrange the piece for solo violin and string orchestra, liberally interpolating Vivaldi throughout the Piazzolla score. St. John confronts Piazzolla with a panache and intellect that perfectly captures the organic beauty of the tango, while infusing it with the spirit of 18th Century Italy.

Gratefully, St. John continues to eschew the "standard" repertoire for her more creative whims, this brilliant Four Seasons pairing being a fine example.