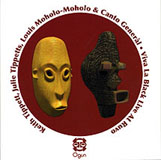 Viva La Black, on this occasion, is Keith Tippett (piano), Julie Tippetts (vocals), Louis Moholo-Moholo (drums, now mysteriously doubling-up his name) and the rather large Canto General ensemble, recorded live at the Ruvo Festival in southern Italy. Their repertoire might suggest a 1970s date, but in reality this was only 2004, with a bold mission to recreate arrangements from the golden years of the Dedication Orchestra and Tippett's biggest of big bands, the bloated Centipede.

An opening salvo leaves the listener wounded, reeling on the floorboards. The South African alto saxophonist Dudu Pukwana's "Mra" is followed by Keith's own "Thoughts To Geoff," both tunes involving the pure embodiment of the joyous rush, full of ultra-dynamic jolts and propelled by a six-strong vocal chorus (seven, counting Julie). Such power! Roberto Ottaviano's marathon soprano saxophone solo is supported by swelling jabs from the enlarged horn sections, then Tippetts is leading her battalion in their own vocal escalation and Moholo is in a tumbling dialogue with second drummer Vincenzo Mazzone. When Tippett's "Dedicated To Mingus" takes things down to calm stasis, at this point that's needed. Then, there are two numbers by the South African bassist Harry Miller, also part of the exiled jazz community in 1960s-70s London.

But there are more apocalyptic blowouts to come, lengthy, intense and hurtling up a gradient to godliness. Tippett's "Cider Dance" and "Septober Energy" arrive at crucial stages in the running order, perfectly illustrating his ability to meld sing-along repetitions with erupting free-form unpredictability. Aside from the latter's exultant nostalgia value (if the listener is familiar with the original vinyl double album!), these are pieces that shimmer eternally, regardless of whether they were penned in the 1970s or beyond. What a great opportunity, presented by the Ruvo Festival, surely unsuspecting of the full forces that were set to be unleashed on their stage.