Mahavishnu Orchestra: Visions of the Emerald Beyond 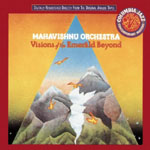 Visions of the Emerald Beyond is the most-overlooked and under-appreciated recording John McLaughlin has ever made. This album, released in 1975, features an expanded Mahavishnu line-up that went beyond a horn and string section to include the dynamic Narada Michael Walden on drums and fusion superstar Jean Luc Ponty on violin.

This album is drenched in a new sort of funkiness that McLaughlin had not explored in previous Mahavishnu recordings.

"Eternity's Breath" opens the album, and right away you know you are in for a sonic treat. McLaughlin's notes are fat and strong. Walden's drumming is powerful and propulsive. Ponty's violin literally soars to heights he has never attained on his own recordings. The strings and horns do not have that superfluous quality found in many other "third-stream" efforts. They are relevant to the musical event. Vocals even pop up now and then, and although they can be somewhat "holier than thou", they too add to the orchestral milieu of Visions.

Many listeners wanting to hear a clone of the original Mahavishnu Orchestra never accepted this band. That is too bad, because MO2 had a lot to say. The band has a full and engaging sound, plus the balls to present it in a grandiose fashion.

Michael Walden's "Cosmic Strut' opened up side two of this album on the original vinyl release. Talk about FUNK! This tune envelops you in it. Walden, who has gone onto to become a superstar producer, was a great fusion writer.

"Lila's Dance" is another gem. When Branford Marsalis served as the musical director of America's Jay Leno Tonight Show, his band, also featuring the fine jazz guitarist Kevin Eubanks, would regularly perform the tune, along with "Meeting of the Spirits." Even two decades years later these tunes were too much for the establishment to take. Management told Marsalis to stop playing this type of music. That attitude, along with some other issues, convinced Branford that he no longer had a job. Eubanks has the gig now, and although he's a huge McLaughlin fan, he doesn't play any of these tunes. He wants to keep his job. That's how dangerous this music can still be.