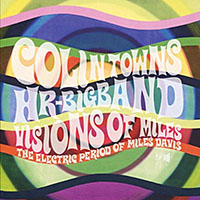 With the 2009 release of the 70-CD The Complete Columbia Album Collection, attention continues to focus on the late Miles Davis, a trumpeter who may have had equals or betters in the technical department, but was unparalleled in terms of relentless reinvention. It's gratifying to find an increasing number of tributes to Davis' post-1968 electric era—ranging from the ambient washes of In a Silent Way and denser Bitches Brew (both from 1969) to the jungle funk of Agharta (1975) and the more accessible 1980s when he released his hit Tutu (1986) and equally funky Amandla (1989) (both on Warner Bros, following his 1985 departure from Columbia)—but most have been small ensemble recordings, focusing on groove, interplay and soloing.

There's no lack of muscular soloing by the members of the German HR-BigBand, heard on Visions of Miles: The Electric Period of Miles Davis, and there's plenty of visceral grooves. But it's musical director Colin Towns' arrangements that invigorate music dating as far back as Joe Zawinul's atmospheric title track from In a Silent Way and as far forward as Amandla's brooding yet dramatic "Hannibal," just two of 15 seminal tunes arranged for this 16-piece big band.

The greasy title track to Tutu, the same album's brighter "Full Nelson," and even fierier "Fast Track," from We Want Miles (1982)—as well as the metal-tinged "Back Seat Betty," from Davis' 1981 return, Man With the Horn—demonstrate the breadth of great source material from the decade where Davis' incurred the most vociferous (and unfounded) accusations of "selling out." With a preponderance of brass, Towns expands upon the original arrangements and breathes new life into these tracks with bright colors and even greater clarity; a surprise, given Towns is working with a far larger ensemble than Miles ever did during his electric phase.

Even more exceptional is Towns' reworking of material from some of Davis' most unapproachable albums, taking largely improvised music often lacking in form and melody, and giving it clear shape. "Moja" and "Wili"—originally comprising the two vinyl sides that made up the first of the double-disc Dark Magus (1974)—motor along with energy and acquiescence to Davis' jagged and unbridled energy. A flute and bass clarinet-heavy arrangement of Davis' tribute to Duke Ellington, "He Loved Him Madly," remains aligned with the original in guitarist Martin Scales' near-surf tone, but becomes a tone poem of dark beauty, with Towns distilling the essence of this 32-minute track from 1974's Get Up With It into a three-minute overture to the arresting groove of Agharta's "Agharta Prelude."

Skipping around the material in a completely non-chronological fashion, Towns demonstrates something most electric tributes don't: that a line can be drawn from the jungle density of the early 1970s to the more polished funk of the late 1980s. That alone makes Visions of Miles worth hearing. Add Towns' reverential yet expansive arrangements and the HR-BigBand's remarkable virtuosity, and it makes for an even more successful homage than Towns' wonderful Meeting of the Spirits: A Celebration of the Mahavishnu Orchestra (In-Out, 2006).