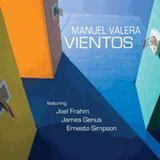 Pianist Manuel Valera merges a classical woodwind quintet with his traditional jazz quartet on a whirlwind of original adventure and swing. His chamber jazz ambience has been influenced by classical composers such as Debussy, Ravel, Stravinsky and Shostakovich but Valera has replaced the French horn from the classical idiom with a bass clarinet, giving a different texture to his ensemble. Five selections feature the jazz quartet alone—Joel Frahm (soprano and tenor saxophones), James Genus (bass) and Ernesto Simpson (drums)—while another seven pieces find them merged with the chamber ensemble.

Originally from Cuba, where he studied classical music as a saxophone major, Valera moved to New York where he switched to piano and immersed himself in the eclectic Big Apple musical arts scene. As a twenty-something jazz innovator, he's sure of himself and by integrating jazz and blues with classical winds, he's created a festive affair with plenty of soul. You can feel tango, mambo and rhapsody integrated with the swinging jazz textures.

The album's title means winds in Spanish and in his liner notes, Valera points out that he considered a double meaning when he put this album together, since his music has adopted a flowing, wind-like feel. The addition of oboe, flute, clarinet, bassoon and bass clarinet produces a clarion sonority that moves freely with ease. Throughout the session, Valera and Frahm float melodies that intertwine eloquently. The woodwinds do, indeed, lend a lovely blanket of sound that wraps up this recommended album with a sure twist of affection.

Vientos; A la Interperie; So You Say; Danz