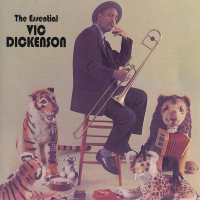 Timeless, straight-ahead 1950's jazz, played with passion and elegance by seasoned musicians at the top of their game. Don't look for bebop or coolness here. These guys weren't interested in revolutions.

Although the 1950's are generally viewed as a period of Father-Knows-Best comfort and conformity, that decade was marked by major upheaval in the world of jazz. The big bands were struggling, dinosaur-like, to avoid extinction amid changes in economics and public taste, while the new sounds of bebop and cool jazz were roiling the air on the east and west coasts. Amid all the turmoil, a loosely bound group of veteran musicians, most of them big-band alumni, continued to play and record straight-ahead, no frills jazz, blissfully uninfluenced by the changes around them.

Some of the best of their recordings were issued under the Vanguard Records label, and of those, the Vic Dickenson Septet series—now re-issued as The Essential Vic Dickenson —is arguably the crème-de-la-crème. Most of the music on this disc is relaxed, easygoing. At the same time, it's openly emotional—by turns sad, playful, joyous, uplifting. And it's pervaded throughout by a certain elegance, which says something about the skill and sensibility of these musicians.

If you buy the disc, choose the genuine Vanguard re-issue for optimum sound quality. (It's a single disc with a photo of Dickenson surrounded by stuffed animals on the cover, and contains 10 tracks, from "Russian Lullaby" to "Suspension Blues.")

Although Dickenson is the nominal "leader," playing time is divided evenly among the key soloists: trombonist Dickenson; trumpeter Ruby Braff; clarinetist Edmond Hall, and pianist Sir Charles Thompson. Each brings a unique, easily recognizable voice to the group. Braff, the youngest member at 26, combines a rich, plummy tone with prodigious technical skill. (He doesn't play on three of the ten tracks.) To discover the roots of Braff's playing, listen to the groundbreaking 1926 Louis Armstrong Hot Five and Hot Seven disc in "Getting Into Jazz." Hall, also heard in the Wild Bill Davison disc in "Getting Into Jazz," is searing and insistent in the instrument's upper register, gentle and plaintive in the lower. Dickenson brings a unique "voice" to his instrument, shouting, growling, slyly insinuating as he slips and slides from one note to the next. And Thompson is a master at telling musical stories using just a few, perfect notes.

Track 5, "I Cover the Waterfront"

Many singers have recorded this song over the years, but it will always belong to Billie Holiday. Listen to her wistful, plaintive version, then give the Dickenson crew a chance. Notice how they've respected her approach to the song, expanding and elaborating on the aura she created. In their hands, "Waterfront" becomes an opus, a passionate, eight-minute exploration in which each musician, through a series of increasingly intense solos, engraves his own emotional signature on the melody.

The track opens with Braff laying down the verse with a tone so rich you can almost eat it with a spoon. At 1:03, Hall inserts the bridge, his delicate, breathy sound playing off nicely against Braff's. At 2:03, Thompson's piano solo begins as merely decorative, but at 2:34 he picks it up with some fine improvisation. At 3:01, a brief solo from Dickenson that's a perfect introduction to his swooping, sliding approach to the trombone. Notice that by almost humanizing the instrument's sound, he's able to convey a lot of feeling in just a few notes.

At 3:33, it's back for another brief statement by Thompson, and then at 4:02, Hall reprises the verse —quietly at first, then taking it up a notch with an upper-register outburst. At 4:59, it's Braff's turn to do the bridge. And then comes something special. At 5:32, as Braff is closing his solo, Hall suddenly cuts him off with a long, penetrating note of such raw emotion that it takes us by surprise. Go back and play that sequence again: Braff's last few pretty notes, then Hall's explosive cry of passion. A moment to remember. The rest of Hall's solo, in which he alternately soars and whispers, is possibly the best sequence in the track. After a nicely improvised solo by Thompson, the song is put to rest with Braff blowing hard and hot right up until the end.

Track 2, "Keeping Out of Mischief Now"

First enjoy Maxine Sullivan's version of this jaunty Fats Waller song, then expand your pleasure with the Dickenson group's playful take on the tune—quite a contrast with "Waterfront." The track opens with Thompson laying down the melody just as Sullivan sings it. Then at 0:42 the ensemble comes in, Braff and Hall playing in unison as Dickenson fills in the gaps with his trademarked growls. At 1:02, Hall breaks away, which starts a round of nifty three-horn counterpoint. At 1:16, a spare but upbeat Thompson solo, followed at 1:50 by Dickenson slyly sliding his way through a couple of choruses. Things heat up at 2:58, as the youngster Braff shows us his stuff. At 3:13, he inserts the first few notes of "Way Down Yonder in New Orleans," then plays with that idea for a bit. His best chorus begins at 3:31. Listen at 3:38 as he easily rips through a series of rapid runs, as if to say "Here's what I could do if I were a showoff." At 4:06, Hall gives us one of his sweet-hot solos, constructed with a draftsman's precision. Listen closely at 5:33, with the track about to close, as Braff quietly adds punctuation to Hall's melodic line, then takes over for the last few bars.

This is without a doubt an old fashioned song, written in 1923 by Eubie Blake and Noble Sissle, and certainly not part of the usual jazz repertoire. In fact it's so obscure that to hear it sung, you'll have to sample recordings by the Mills Brothers, Merle Haggard, Alberta Hunter or Bob Wills and His Texas Playboys. But this old chestnut has a lovely melody, and Dickenson & Co. expand on its beauty, slowly and elegantly. If the mood in "I Cover the Waterfront" was anguished, here it's gentle, tender.

Dickenson opens the track with a simple rendition of the song's introduction. Then at 0:45 he introduces the verse, clearly and quietly. At 2:26, Hall's beautiful solo is as gentle and soothing as a lullaby—compare his tranquility here to his searing approach in "Waterfront." At 4:10, Braff picks up the mood, using that rich, open tone of his to tell a love story. Thompson continues the story at 5:54, and then at 6:45 a hushed, tremulous solo by trumpeter Shad Collins. That leads, at 7:38, to two joyous choruses of ensemble counterpoint. Play this part again, and let the conversation between Braff, Hall and Dickenson envelop you. There's rapture to be found here.

If you're not familiar with this jazz evergreen by Harry Warren and Johnny Mercer, listen to Frank Sinatra's gently swinging recording from the mid-1950's. The Dickenson crew sustains the lighthearted mood, taking turns playing with the melody through a series of extended solos. The track begins with a delightful bit of three-horn counterpoint with Braff leading the way. Listen as Hall's high, raspy clarinet and Dickenson's throaty trombone fill in the blanks.

From 1:08 to 9:03, Thompson, Dickenson, Hall and Braff treat us to a series of masterfully crafted improvised solos. Each musician plays several choruses, repeatedly shaping the original melody into something new and beautiful. Notice that there's no cheating in these solos—no brainless repetition of notes and phrases to fill empty space, no displays of technical virtuosity to cover up a lack of melodic imagination. Each chorus of improvisation tells a story that has a beginning, middle and end, and each retains a recognizable thread of the original melody.

After a brief piano solo at 9:03, it's back to spirited ensemble counterpoint until the end. You'll hear a fleeting blooper at 11:00 in which the horn players seem to step on each other's toes. Hey, they're only human.

Russian Lullaby; Keeping Out Of Mischief Now; Sir Charles At Home; Jeepers Creepers; I Cover The Waterfront; Runnin' Wild; When You And I Were Young, Maggie; Nice Work If You Can Get It; Old Fashioned Love; Everybody Loves My Baby; Suspension Blues; You Brought A New Kind Of Love To Me.