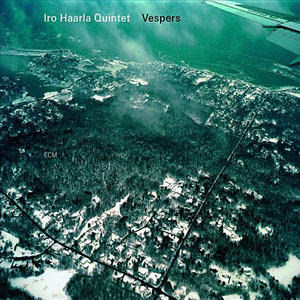 It's been six years since Iro Haarla released Northbound (ECM)—while not her actual debut as a leader, certainly her first with international exposure—an album of remarkable beauty that cemented the Finnish pianist/harpist/composer's position as the silent voice behind the music of her late husband, drummer Edward Vesala. There's no denying the import of Vesala's work for ECM, beginning with 1976's Nan Madol—truly a momentous album that spoke, in cinematic terms, of the landscape and culture of Finland—but, equally, a fundamental shift occurred, with the arrival of Haarla on 1987's Sound and Fury, that spoke to the impact that the young, classically trained Haarla had on the drummer's writing. Since Vesala's death, in 1999, it's become public knowledge that Haarla's input to his music was beyond significant, and the credit she is finally receiving rights a decades-old wrong, with a reformed Sound & Fury tribute band, featuring alumni from Vesala's flagship group, crediting Haarla by performing her music at the 2010 Tampere Jazz Happening.

Haarla's been far from inactive since the release of Northbound, touring with an all-Finnish version of the all-star Scandinavian band on the recording, and working with another Finnish legend, saxophonist Juhani Aaltonen, on Conclusions (Tum, 2009), and a 2010 Tampere Jazz Happening performance. Vespers shares plenty with Aaltonen's disc. Both discs feature her current husband Ulf Krokfors—known amongst ECM fans for work with Vesala, and the sadly overlooked Krakatau, and for shifting his name from Uffe to Ulf, seemingly at will—a bassist as capable of holding down a groove on the simmering "Satoyama" as he is anchoring the rubato "A Port on a Distant Shore" with minimal but ever-perfect and muscular choices, as Norwegian drummer Jon Christensen paints with a strong emphasis on cymbals over drums. Both discs also feature her "The Shimmer of Falling Stars," here dropped a number of keys, and played with a broader sense of temporal freedom.

Haarla's piano work is, as ever—and like her quintet's—the epitome of economy, never playing a series of chords when one beautifully ambiguous one will do, but it's her unparalleled harp work that gives much of her music its sweeping sense of the cinematic. Haarla's music doesn't just evoke the visual, however, it's actually possible to feel "The Warm Currents of the Sea," as Seim and fellow Norwegian, trumpeter Mathias Eick—two players who, in their remarkable timbral control, perennially favor quality over quantity—weave in, out and around each other, coming together in magical moments of synchronicity over the quietly turbulent foundation laid by Haarla, Krokfors and Christensen, only to dissolve and depart again, as Haarla takes a solo of shimmering beauty.

Northbound may have been more immediately impressive for its unexpected combination of tranquil stasis and gentle forward motion, but Vespers is the perfect follow-up, one which capitalizes on both the strength of Haarla's compositional conception and the stunning perfection of a group of distinct and individual voices—most, leaders in their own right—who join together to create a collective sound truly like no other.

A Port On A Distant Shore; Vesper; A Window Facing South; The Warm Current of the Sea; Doxa; Satoyama; The Shimmer of Falling Stars; Returning Home; Adieux.