By Clifford Allen
October 3, 2003
Sign in to view read count 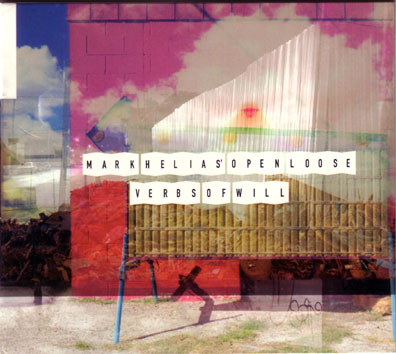 If modern jazz has truly reached a historical synthesis of the sort that will keep it going indefinitely and show its "guts," then free-bop might just be that most promising vein. It’s not that free-bop is a particularly new animal; the net can be cast to both Ornette and Hamiet Bluiett, but it often shows more life and individuality than textbook recreations of classic Blue Note sides could offer and yet keeps its freedom in enough check to still be relevant.

Bassist Mark Helias is no stranger to this realm of the music; his work with Dewey Redman and Ray Anderson places him firmly in the inside-outside bag, and stints with Braxton and Anthony Davis belie that he is a student of form.

On Verbs of Will, Helias is joined by longtime companion Tom Rainey in the drum chair and Tony Malaby on tenor saxophone. This is by no means a "power trio" in the sense of fierce tenor running over a rhythm section, but a study in seamless, supple interaction, in which the cooperative nature of the band makes a name on the cover irrelevant. No member of the group is a star player, not even Helias, whose contribution can be understood mainly through the tug-of-war he has with Rainey. This rhythm section is very subtle; a meter can be brought up early in the conversation, only to be pulled apart into free time a few sentences later, then start swinging again.

Malaby is no slouch in dealing with rhythmic high jinks; he is a melodic improviser, somewhat akin to Archie Shepp or Sam Rivers, with a bit of ‘Texas tenor’ thrown in for good measure. Yet he also has the ebullience of a Marion Brown, which fits so well in the fractured marches and rumbas that Helias and Rainey throw out (midway through “AKA,” for example). The seamlessness of the proceedings also runs through the compositions; whether conceived as a suite or not, “Relic,” “How ‘Bout It,” and “King Judas” are effectively one piece, each track flowing into the next. The entire album has this effect; many of the melodies have a similar thrust to them, and these are only broken up by occasional and brief forays into a-melodic free improvisation. The short free pieces are actually somewhat detrimental, for the group sounds most together when romping through the rhythmic minefields of tunes like “Detonation” and “How ‘Bout It.” Nevertheless, they do serve to break up what might otherwise seem a sameness to the music.

It is obvious from this recording that Helias has assembled a group that can play his uniquely swinging compositions with grace and vitality, yet the irony of this feat is that the compositions are subsumed to a holistic group language, and it becomes increasingly difficult to tell where "theme" and "improvisation" begin and end. This is, of course, the ideal that the bandleader-composer wishes to attain. One can hope that this band continues to mine its chosen trough.