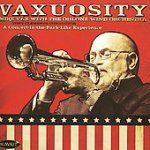 While no ephemeral "Willoughby," Vaxuosity represents a dream-come-true project of long-time lead and jazz trumpet star, Mike Vax. Here Vax, accompanied admirably by the Ohlone Wind Orchestra, pulls out all of the stops to send up 14 concert band and solo rep favorites.

It takes chutzpah for an instrumentalist known for his superb lead playing with Stan Kenton to take on the "standards" of the solo literature that were written specifically for or performed by some of trumpet's greatest names, including Don Jacoby, Bohumir Kryl, Harry James, Doc Severinsen. As a matter of fact, "Trumpeter's Prayer," while not a concert band piece, per se, was the signature recording of the legendary Conrad Gozzo. Only a handful of trumpet artists would dare perform—and Vax beautifully delivers—this selection which has its own lore and mythology firmly established in the world of trumpet.

Virtousity-and pure fun—is the name of the game in this highly enjoyable CD. Although known primarily as a jazz player and clinician, Vax is no stranger to this technically-oriented literature. He majored in trumpet performance in college and studied with the great Don Jacoby before launching his jazz career with the U.S. Navy Show Band, Stan Kenton, the Dukes of Dixieland, and others. Some might argue that the selections here are the sole domain of classical music. Vax, aptly demonstrates that he has the artistic and technical chops to cover the literature with taste, fire and verve.

The Ohlone Wind Ensemble, under the able leadership and direction of Tony Clements, rises to the occasion and takes no back seat to Vax. Their sound is energetic, lively and carries razor-sharp intonation, providing a platform for Vax's technical fireworks. The recording and production qualities are superb and it's obvious that it was a labor of love for all involved.

While "Willoughby" might have been fantasy, Vaxuosity is a wonderful real-life effort, hands down. It is pure virtuosity, pure enjoyment and simply, trumpeting sunshine.