By Eyal Hareuveni
October 1, 2011
Sign in to view read count 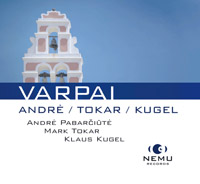 On "Symphonic Fields," Pabarčiūtė's broad vocal range touches Tokar's lower register arco and then soars gently to the stratosphere, while Kugel resonates with spare bells and cymbals. But the mood of this piece shifts organically between meditative tranquility and dense and powerful interplay. Tokar's fat, low arco grounds "Wood Dance" as a shamanic dance, contrasting the fast syllables of Pabarčiūtė and the distant, echoing rhythm that Kugel lays down. The interplay becomes tight and playful in "Play Or Way?" led by Tokar's assured pizzicato.

"Echoes Of The Trees" feature the angelic side of Pabarčiūtė's rich voice, enveloped by Tokar's deep tones and Kugel's sound objects, in a slow, archaic suite. Tokar and Kugel create a dense, open-ended soundscape on "Church In Blue" in which Pabarčiūtė's nasal grunts serve to bind the piece together. Tokar's atmospheric drones introduce the otherworldly "Sacred Forest Trio," which patiently blossoms as a beautiful, telepathic interplay between arco bass, operatic grunts and resonating bells. "The Lizard Of Aukstumala" continues the previous moody soundscape, but is even more adventurous in its inventive, urgent sounds. "Archaic Glimpses" features the humorous side of a trio that is built with such free, playful improvisations. The concluding title piece, with its chiming bells and Pabarčiūtė's gentle, angelic voice, feels like a farewell prayer after this fantastic trip in sound.

Andrė / Tokar / Kugel is a remarkable trio that has only begun to explore its potential.