By NENAD GEORGIEVSKI
October 29, 2016
Sign in to view read count 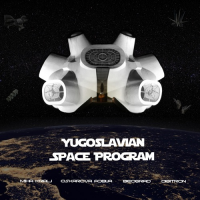 Science Fiction has always been a captivating genre be it literature, visual arts or in films. It's the art of imagining a possible future or many of them, creating dystopian or utopian scenarios, mapping the unknown extraterrestrial terrain, reflecting fears of annihilation but always deploying technological and scientific motifs and subjects. All of this reflected not only in the previously mentioned areas but in music as well. During the second half of the 20th-century hundreds of musicians began exploring electronic music utilizing different tools to map the sounds of the future that reflected these notions through music.

The Yugoslavian Space Program is a compilation of synthesizer music by underground electronic musicians from what is now known as former Yugoslavia. Released by Discom, a newly established Serbian record label that explores the little known or virtually unknown vintage synthesizer/electronic music from the '80s Yugoslavian music scene it feels like a trip down the memory line. Recorded in a short span during the early and mid-'80s in DIY conditions and equipment it reflects sentiments of a bygone era when its society dreamt of a different, better and modern future. It was a golden age not just for music but for other arts as well. For a certain period of time in that country, there was a fertile cultural exchange that affected different other fields such as publishing, arts.

The title Yugoslavian Space Program makes a nod at the recently released mockumentary "Houston, We Have a Problem!" about the alleged Yugoslavian space program that is traversing the film festival circuits. The film is an X-Files styled uncovering of conspiracies from the Cold war era and a space program that allegedly gave a boost to the US Space program so it could win the space race with the USSR. The album's front cover also utilizes the modernistic art tendencies in Communist countries from the post-WWII era in the form of the many odd-shaped SF-like monuments that still exist throughout this territory. Today, many of those are so out of time and so odd-shaped that they resemble deserted and forgotten space outposts left in unknown worlds.

Nevertheless, the music reflects the modernistic tendencies from the outskirts of a society when those with synthesizers were seen as solitary space explorers. This compilation consists of 4 artists and groups, and they provide music that is offering similar aesthetic but clearly under the influence of different strong synthesizer music centers at the time—Kraftwerk, Jean-Michel Jarre, Brian Eno and the Synth Pop movement at its infancy. Opening with two tracks by Slovenian pioneer Miha Kralj, "Robot" and "Juh-Hu" tracks that utilize an array of primitive drum machines, bubbling and whirling thin vintage synthesizer sounds and processed vocals. They sound primitive and outdated when looked upon from this standpoint, but these tracks do carry a sense of wonder and discovery, a notion that many of today's electronic music, apart from its nice aesthetics, is clearly devoid of. They are like aural photographs with ingrained memories from a distant past.

On the other hand, the band Oscarova Fobija offers two previously unreleased tracks, a song that is influenced by the aesthetics of early minimal wave (or synth pop) movement like Human League, OMD in its rawest form with "Između dve kapi znoja"(Between Two Drops of Sweat) and a dynamic instrumental track titled "Mayan Spacecraft" which presents a kaleidoscope of interesting pulsating primitive electronic pop beats, electronic atmospheres and Far East ethnic flute samples. Out of this list, the band Belgrade is probably better known than the rest as it has enjoyed some success with the appearance of synth-pop bands at the start of the '80s. Compared to the rest, its music is better produced and arranged. The band has a layered sound design and doesn't apply sound effects for the sake of decoration and immediate effect. "Eenterstellar" builds on metallic chimes echoing over deep drones that keep building both in the background and at the front. Digitron's music is directly influenced by Kraftwerk's music and its robotic side with its propulsive sequencers and synth voices that sing of "computer love."

Each of these tracks has its own energy and harbors different styles. All of them sound different both in sound and pace. There is a strong nostalgic trip down the memory line with this music. From this standpoint, it's like a time capsule that has encapsulated the dreams, wishes, hopes and cultural values that less than a decade away will be shattered brutally. The Yugoslavian Space Program compilation is what the future sounded like during the ancient '80s when for a moment a nation dreamt of or envisioned a better future for itself.