Atlantic was a record company that defined the jazz continuum, moving the artistic goalposts to the end zone where labels have no meaning 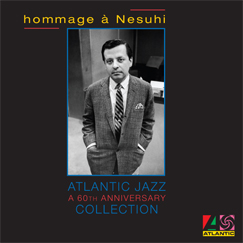 Of the various and sundry individuals involved in the making of a record, the producer is the most mysterious and ambiguous presence of them all. Many ill-equipped but ambitious people—including hangers-on, frustrated musicians, over-reaching critics, and record executive accountants—have attempted to fill the role, with often mediocre results, which partially explains the sad state of affairs in today's music.

But there was a time when highly cultured, musically literate renaissance men shaped recording sessions, producing many of the sound-sculptures that we recognize as classics today. Men like Nesuhi Ertegun—the urbane, cosmopolitan, Turkish-American diplomat's son, who, along with his brother, Ahmet, co-founded the legendary Atlantic label in 1948. Nesuhi is the subject of Hommage A Nesuhi: an exquisite, limited-edition, 61 track, five CD boxed set of immortal jazz selections from the label's impressive discography.

Covering a vast and fertile era, Hommage A Nesuhi moves from 1955 to 1976. The box includes a sterling 84 page booklet, with Lee Friedlander's outstanding photography and the heartfelt liner notes of the set's producer, the late Joel Dorn (the famed Philly-born DJ who started his career at Atlantic in 1967 as Nesuhi Ertegun's trainee). There are also tributes from Sue Mingus, Gunther Schuller, Nat Hentoff and Dr. John. This darling and danceable document not only represents the zenith of an influential label's catalog: it also diagrams the interwoven sonic sentences that connect all of the myriad inventions and dimensions of jazz—from bebop, cubop, hard bop, third-stream, and avant-garde—to R&B, blues, and rock.

Disc One: Some Atlantic Jazz

Singer Ray Charles, The Modern Jazz Quartet, bassist Charles Mingus, and saxophonists John Coltrane, Ornette Coleman, Yusef Lateef and Rahsaan Roland Kirk dominate the collection, with selections on each disc, each of which has a theme. The first disc, Some Atlantic Jazz, is arguably the most mainstream aggregation, as evidenced by the bitter-earthed alto saxophone of David "Fathead" Newman's "Hard Times." Newman was the principle soloist for Charles when he recorded his famous sides for the label, and the blind singer/bandleader/pianist shines on the southern-stomped, piano trio instrumental "Sixteen Bar Blues." These tracks are contrasted by the elegant, contrapuntally cool, but no less funky MJQ cooker "The Golden Striker" and the equally-equiposed "Martians Go Home" by the criminally overlooked west coast trumpeter, Shorty Rogers. Eddie Harris' Nuyorican, bluesy boogalo, "Listen Here," revels in all of its electro-saxophonist sizzle, along with Herbie Mann's funky flute on the Stax-styled groover, "Memphis Underground." As mainstream goes, you can't get more mainstream than the feather-breathed vocalist Chris Connor; an often-unacknowledged predecessor of artists like Jane Monheit and Diana Krall, on her orchestral rendition of "I Miss You." But on the other end of the vocal spectrum, Oscar Brown, Jr.'s "A Ladiesman" is a stripped-down, pre-rap ode to a playa, one that melodically foreshadows saxophonist Grover Washington's monster smash "Mister Magic," with percussionist Ralph McDonald, and backup singer Cissy Houston.

Shades of Blue, the second disc, is a further exploration of the infinite, azure-angles of the label's catalog. Charles' bucket-of-blood rendition of the Horace Silver number "Doodlin'" is a stylistic stones-throw away from Kirk's slow-drag rendering of the Scott Joplin ragtime classic "The Entertainer." Another Midwestern-mooded blues, "Cherry Red," by the blues shouter Big Joe Turner, toe-taps with one foot in jazz and the other in early R&B, as does Lavern Baker's "Empty Bed Blues." Coltrane's Philly-centric, up south swinger "Cousin Mary" takes the juke joint to the big city, as does fellow City of Brotherly lover pianist Ray Bryant's Fats Waller-sequel "Blues #3—Willow Weep For Me," while Lateef's "Like It Is" takes the blues to the East with his earthy flute and tenor sax, buttressed by hip-notic bass line and scintillating strings. But leave it to the above average white crooner Mose Allison to bring it all back to Mississippi with his hit, "Stop This World." It's trademarked by Allison's dry delivery that shows off that certain bluesy "southerness" that American music is sautéed and simmered in—taken to sarcastic extremes by Charles Mingus' sanctified syncopations on "Oh Lord Don't Let Them Drop That Atomic Bomb On Me."

Atlantic was a label that also recorded R&B, soul, pop and rock, and its brand of jazz-honed, bluesy realism cross-pollinated those aforementioned genres long before the term "crossover" was invented. That formidable and funky fusion comes through loud and clear on the third disc, Live. Charles' sanctified stomps on "I Got A Woman" marry the Saturday Function with the Sunday Morning Service, as does the slower-tempoed, but no less rocking "The Catbird Seat" by the still-unheralded Mitchell/Ruff trio, with Dwike Mitchell on piano, instead of his French horn. The MJQ chestnut "Bluesology," featuring vibraphonist Milt Jackson, is a compelling and complete study of blues if ever there was one, where Jackson, unusually unconstrained by pianist John Lewis' fugal and formal arrangements, lets loose a fiery bop-born solo that was a crowd pleaser for group from its early days right up Jackson's death in 1999. But two immortal, location recordings—Mann's head-bopping version of Ben Tucker's soul-pop song "Comin' Home Baby," featuring pianist Thelonious Monk's bassist, Ahmed Abdul-Malik, and conguero Ray Mantilla, and the driving Les McCann & Eddie Harris track "Compared to What"—recorded in Switzerland and the Village Gate in New York City, easily navigate down a tributary where soul, jazz and urban protest meet.

Disc Four: On the Edge

The protest aesthetic found its most expressive home in the jazz innovations of the late 1950s, 1960s and 1970s, which comprise the fourth disc, On the Edge. Coltrane's sheets-of-sound tour de forces "Giant Steps," and "My Favorite Things," along with Coleman's deep-in-the-heart-of-Texas, pre-harmolodic "Ramblin'" and Latinesque "Una Muy Bonita," sounded the alarm that change was coming long before the election of the forty-fourth President. Despite the twangy jazz-rock of vibraphonist Gary Burton's "Vibrafinger" (with Sam Brown's Hendrixian guitar and Steve Swallow's driving baselines), Mingus' "Hog Callin' Blues" shows that the avant-garde, heard here with gritty church shouts, driving drums, and unvarnished field hollers, is far older that we care to admit. So too does Kirk's "multi-saxophoned" aural letter "The Inflated Tear," Lateef's piercing alto saxophone obbligatos on the waltz "In A Spanish Town." This last track is, arguably, the sonic wonder of the collection, featuring an audio sample of The City Service Quartet, a vocal group, from 1927, that foreshadows hip-hop's use of the technique by decades. It's hard to appreciate today that the sonic booms launched by these artists were recorded on a pop label.

Atlantic was a record company that defined the jazz continuum, moving the artistic goalposts to the end zone where labels have no meaning, as the potpourri nature of the last disc, Some More Atlantic Jazz, sonically suggests. The MJQ's scintillating take on Antonio Jobim's "One Note Samba," with the brilliant Brazilian guitarist Laurindo Almeida, is an excellent North American treatment on the bossa nova, at a time when many Americans couldn't get beyond the genre's cliches of sand sun and girls. Harris' "Love Theme From the 'The Sandpiper' (The Shadow of Your Smile)" is equally ebullient with its "Exodus" evocations that also rhythmically dopplegangs Ahmad Jamal's "Poinciana," and provides ample proof to many who heard his raunchy, comedy recordings that he was the real deal. Equally evocative are Lateef's gangsta-leaned, "Nubian Lady," which bounces with some zesty, Albert "Tootie" Heath-powered drumming, and tenor saxophonist/flutist Charles Lloyd's Coltrane-for-the-masses, flower-powered "Sombrero Sam," with his classic quartet of pianist Keith Jarrett, drummer Jack DeJohnette and bassist Cecil McBee. Flutist Hubert Laws' Afro-Cuban anthemed "Let Her Go," and pianist Phineas Newborn's memphisto take on the Charlie Parker bop standard "Barbados," clearly shows that the label knew what the Latin tinge was all about.

What this collection also shows, from the vivid vocals of Little Jimmy Scott and Chris Connor, to the in-the-pocket soul-jazz stirrings of drummer Max Roach's "Nommo," is that Ertegun and his protege, and fellow producer Arif Mardin, possessed an enormous historical knowledge of African-American history and culture. And they knew how to create an environment where their stellar artists could reach their highest artistic heights. More importantly—unlike many of today's pretenders to the producer's throne—they knew that it wasn't about them: it was about the music. That sublimation of ego insured their place in music immortality.