By JAKOB BAEKGAARD
April 13, 2020
Sign in to view read count 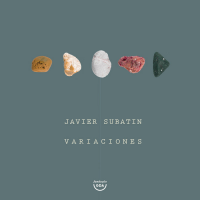 When Argentinian guitarist Javier Subatin released his album Autotelic (Sintoma, 2018), it was a refreshing examination of form that took its point of departure in the intimate interplay between guitar and piano, occasionally enhanced by drums, bass and saxophone. It was a concept that did Subatin's complex compositions justice as he managed to find the right balance between insistent energy and a dwelling sense of space.

However, it might be wrong to say that Subatin himself found the balance, because the concept behind Autotelic was actually to let the music take control and let it move in any possible direction. This concept of musical intention is once again followed on Variaciones, with the quintet as a musical template. It is a move that was foreshadowed on Autotelic, but now it comes into full fruition.

Subatin has enlisted a group of highly capable musicians and once again the interplay between pianist João Paulo Esteves da Silva and Subatin is a highlight as they melt together only to separate in intertwining voices of fugal delight on "Prelude."

Compared to Autotelic, there's more musical punch this time, which might be a plus in a live situation, but taken as a listening experience the album lacks some of the space of the predecessor. While the pieces are awe-inspiring musical constructions of much elegance, they also become a bit dense. The music sometimes feels like walking into a labyrinth with brisk steps and there are fewer moments of simplicity.

If this is the will of the music, so be it. Variaciones is still a worthy effort from Subatin that confirms his strength as a forward-thinking modern guitarist with a secure sense of form and melody. As a bonus, the physical CD comes beautifully packaged in a cardboard case with seven art cards that show different combinations of stones, a fitting metaphor for the musical variations found on the album.