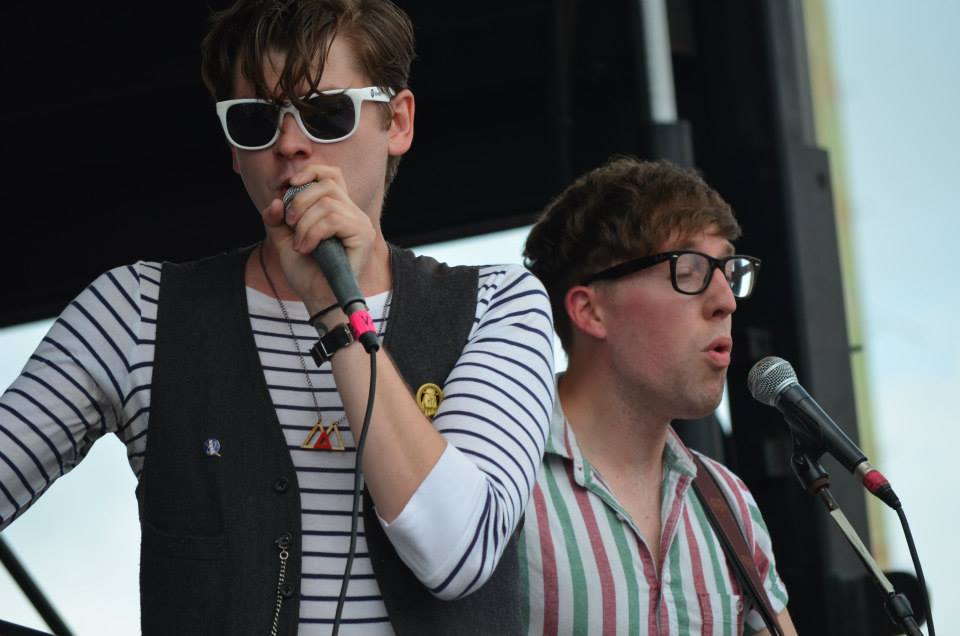 Tomorrow's stars today. In essence that is the mission statement of the Warped Tour. The festival, which began in the mid -90s, features many popular new bands and even more up-and-comers who gain buzz amongst both fans and the industry by playing the multi-city festival. Sponsored by Vans, the tour features the best in pop-punk, skater punk, good old-fashioned punk, electro-punk, ska, emo, screamo, hardcore, rap, post- hardcore, hip hop, new metal, Christian metalcore, rock (yes, good old fashioned eock) and so much more. Since its inception, the Warped Tour, has thrived by delivering the best of these genres as well as the prerequisite skateboarding stunt exhibition that has become synonymous with the festival.

On Saturday, July 13, 2013, in the midst of one of the worst heat waves in recent New York City-area history, the Warped Tour touched down in Uniondale, NY (Long Island) at the Nassau Coliseum. With temperatures in the mid-to-high nineties, the crowd was not only treated to hot music but blistering hot weather.

Held in the Nassau Coliseum's parking lot, the festival featured many different stages. These stages were sponsored by a number of different corporate entities from many different walks of life (music and otherwise). These sponsors include: KIA (who sponsored two stages—one for the Soul and another for the Forte), Spotify, Monster Energy Drink, Ernie Ball and many others.

The festival's headliners (Memphis May Fire, Hawthorne Heights, The Used, Motion City Soundtrack, Never Shout Never, We Came As Romans, Black Veil Brides and Reel Big Fish) all played rousing sets to enthusiastic fans. The performances were as much about the music as the audience's participation which included sing-a-longs, crowd surfing, beach balls, and toilet paper rolls bouncing across the crowd. But it was away from the main stages where the festival got interesting. Off to the side on the Ernie Ball Stage, some of the lesser known bands played short but spirited sets of wonderfully raw and inspired kick-ass rock 'n' roll. Face The King, who graced the same stage in 2012, played again in 2013—with one big difference. In 2013, the band's Warped Tour performance was a preamble to its CD Release Party concert scheduled for later that evening at New York City's Gramercy Theater. 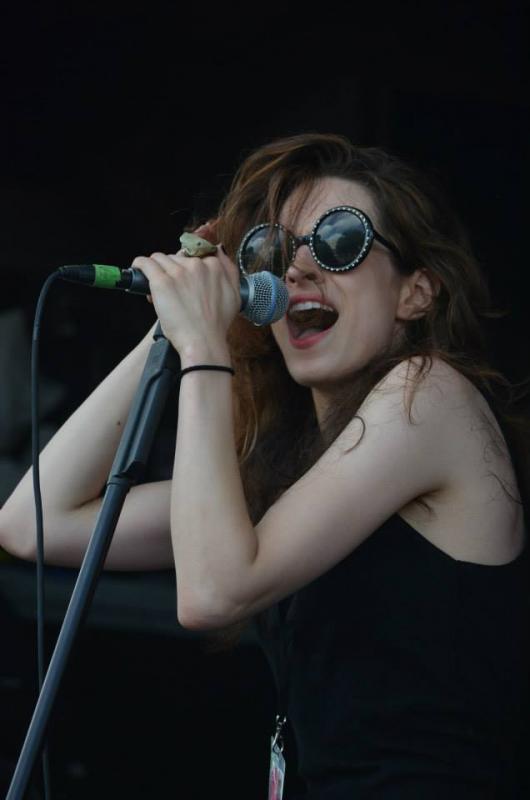 The Ernie Ball Stage was also home to American Pinup (from White Plains, NY) who's spirited power pop/punk set featured songs from Strange Creatures (Altercation Records, 2011) and from its as- yet-untitled disc which will be released in the fall of 2013. The set was highlighted by the song "Go," on which lead vocalist Lauren West encouraged the audience to join in by shouting the songs title and chorus because "it always feels good to shout." Danielle Barbe from (Pittsburgh, PA) and her band also played a rockin' set on the Ernie Ball Stage, performing tracks from her self-titled debut CD (Daniellebarbe.com, 2011). Her high energy performance was highlighted by "Ghost Town" (which was featured in one of the last episodes of the Ghost Whisperer TV show). Jonas Sees In Color (from Greensboro, NC) delivered the good with an energy-soaked set featuring songs from its self-released 2013 CD, Give Me Mine. The band (Ryan Downing on vocals, guitarist Jonathan Owens, bassist Michael Deming and John Chester on drums) drew the usually jaded New York crowd toward the stage with a powerful set and some fantastic showmanship. The City Shake Up is a true road warrior. The Brisbane, Australia-based band delivered a strong set of punk-influenced rock. Mixing excellent originals with the occasional cover (The Cranberries), the band had the audience (which seemed unaware of the band's musical power and stage presence at the beginning of the performance) crowding the stage as its set came to a close. Other impressive performers on the Ernie Ball Stage included The Art of Shock and The Allways.

The new bands, the waves of the future were not all relegated to the Ernie Ball Stage. The Kevin Says Stage was home to The Bangups. This two-man band from Grand Rapids, MI (Joey Dornbos on an old Silvertone guitar and drummer Brent French) played the best mashup of delta blues, country, rock 'n' roll, punk, pop, rockabilly and Americana heard at the festival. Dornbos and French played a set of fast, hard and rocking music that would have done Jack White proud.

The up-and-coming Alvarez Kings (its pop sensibilities rivaling those of fellow British acts The Maccabees, The Kooks and The Static Jacks) also graced the Kevin Says Stage. The British Pop band's amazing set featured guest appearances by Warner Brothers recording artist Echosmith (which later rocked the Ernie Ball Stage with its own strong headlining set), festival headliner Reel Big Fish and William Beckett (of the now defunct Chicago-based band The Academy Is...). The talented musicians seamlessly worked the guest performers into their set. William Beckett, who knew the choruses, unashamedly used his iPhone as a guide for the more intricate lyrics. 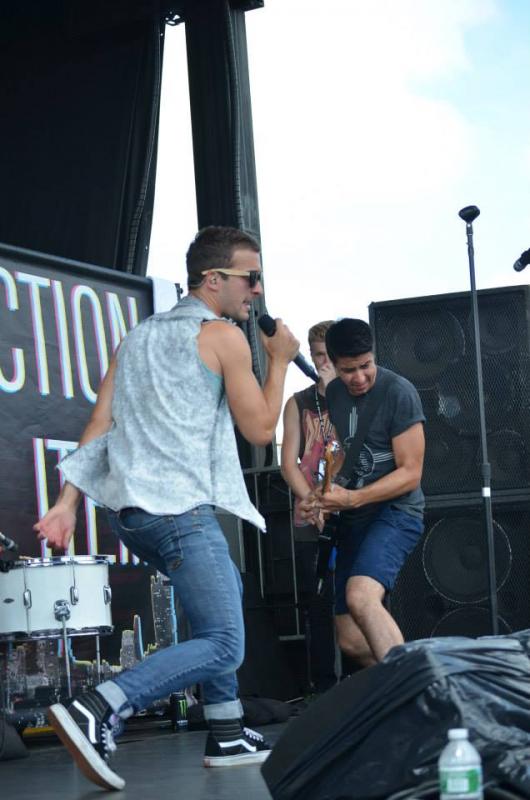 Hailing from the state of New Jersey, Action Item bounded onto the Domo Stage to the raucous applause of its already established fan base. On tour for the past two years in support of its first EP, The Stronger The Love (Independent, 2010), lead singer Brian Cag and company clearly knew how to interact with the crowd. The poppy sound was radio friendly and the band has been successful in winning over listeners both young and old.

Spotify Stage headliners included an eclectic group of hot young DJs including Shy KidX, Grizzly, MacLeathal, RUN DMT and MC Lars who all spun monster beats and worked the crowd into a frenzy as they encouraged dancing as well as fist-pumping.

As always, The Warped Tour offers an number of tents where attendees can purchase music, t-shirts, caps, artwork and much more. Retail Therapy is the name of the game. In addition to the official Warped Tour merchandise booths and Vans merchandise booths, participating bands, record labels, energy drink companies, makers of condoms, specialized T-Shirt manufacturers and musical instrument companies and other vendors have onsite boots/tents. Food, soft drinks, Gatorade, ice cream and water is, of course, available at a number of different stands. The organizers of the event also set up a number of free hydrating stations where audience members could refill their plastic soda bottles or the plastic water pouches that sponsors gave away to the crowd.

As in the past, the festival features a special "Reverse Daycare" section where concerned parents (many of the concert-goers are young and unable to drive) could relax and stay refreshed. The area allowed them to get away from the festival's insanity while their kids moshed, rocked out and enjoyed the festivities.

Finally, what would the Warped Tour be without its annual rituals? These rituals are part of its history—many idealistic concert goers either wore their own home-made t- shirts or got their bare midriffs painted with an offer of "free hugs" and/or "free kisses."

The Vans Warped Tour was a huge party at which musicians, bands and audience members were invited to express themselves. The music played at the tour was specifically the music of the current generation—with an eye toward the future. New music was promoted and given an opportunity to be heard. Unknown bands and performers were given what was, in many cases, their first national exposure. It was a truly idealistic and utopian concept that has succeeded now for almost twenty years.