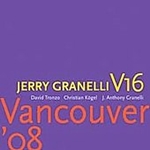 Over 40-plus years as an innovative performer and renowned educator, drummer Jerry Granelli has shown an affinity for the sonic possibilities of paired electric guitars. Since 2003, he's explored this interest in V16, with guitarists David Tronzo and Christian Kogel and his son, electric bassist J. Anthony Granelli. Vancouver '08, their third release, vividly captures their unique sound world—referencing jazz, blues and psychedelic rock, but not beholden to these traditions.

The group has forged a collective identity with all members contributing compositions and arrangements specifically for it. The approach is also egalitarian: any instrument can, and likely will, take the melodic lead or solo, before transitioning to creative support—blurring the distinction. In the sparse unfolding of the bassist's "Planting," the elder Granelli is untethered from timekeeping to color and accentuate the open movement. On Tronzo's "The Truth," his guitar forms a tight pocket with the drummer, as the bassist and Kogel intertwine on the melody.

The strings move together for the formal introduction of Kogel's "Wellfare." When drums enter, the piece swells with poignancy before receding to Kogel's gentle guitar conclusion, which segues to his balladic duet with bass on "Udon Waltz." The songs are unhurried and the musicians use the slow-to-mid tempos to probe the compositions fully. Tronzo's "Unnamed" has a smoldering intensity, his ominous repeating phrase playing a rhythmic role, before his twisted slide runs open the piece for freer collective improv. Conversely, "Steel Eyed Blues" opens with swirling strings until a bass line emerges, forming a groove with drums that elicits a quasi-reggae vamp from Tronzo and Kogel's echoed and delayed retorts.

The DVD Live at Ironworks is an included bonus, featuring a performance from a few days before the studio session and covering much of the same material. It highlights the pliability of the music and the improvisations it provokes. The footage also reveals the enthusiasm of the musicians and the fluidity of their rapport. V16 is a reflection of Granelli, expressing a summation of his life in music.