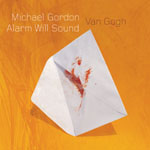 For its third release on the intrepid new music classical Cantaloupe label, Alarm Will Sound shifts away from its chamber music interpretation of Acoustica: Alarm Will Sound Performs Aphex Twin (2005) to a piece of music that, while not exactly new, has been documented for the first time. Composer and Bang on a Can Artistic Co-Director Michael Gordon wrote this six-part theatrical piece in the late 1980s. First performed in collaboration with video artist Elliott Caplan in the 1990s as Van Gogh Video Opera, in 2005 he removed the video aspect and rearranged it for a scaled-down version of Alarm Will Sound. Van Gogh reflects Gordon's penchant for breaking down musical barriers and the constraints and formats of conventional classical music.

Sung by soprano Sarah Chalfy, tenor Matthew Hensrud and bass Clay Greenberg, Gordon's text is based on letters the infamous ear-chopping artist Vincent Van Gogh wrote to his brother Theo during his relatively short life (1853-1890). It's a tragic text, starting with his woefully inadequate letter looking for a job at a church, to his final years in Southern France, where he grappled with the mental illness that led to his self-committal and, ultimately, tragic suicide. It's not until nearly half-way through the hour-long suite that any mention of Van Gogh's art arises, and even those words are filled with darkness. Van Gogh describes a painting on the closing "St. Remy" that, perhaps presciently, references a reaper and "The image of death in a sense that Humanity might be the corn he is reaping."

It's rare to find a classical ensemble utilizing electric instruments and a drum kit, but this twelve-piece incarnation of Alarm Will Sound features guitarist Ryan Ferreira and percussionists Dennis DeSantis and Payton MacDonald bringing surprising funk energy to parts of "London." Minimalism is a part of Gordon's approach, especially in the way a series of repeating figures interlock on "Borinage." Gordon also reflects aspects of Gavin Bryar's sometimes deceptive simplicity on the spare "The Hague Part I," defined largely by voices and strings, working at times in harmony, other times in near opposition.

"The Hague Part II" begins with Ferreria's arpeggiated guitar, gradually quickening as the strings enter and the piece turns more dramatic. Violoncellist Stefan Freund picks up the arpeggios as the piece becomes more angular still, with pianist Courtney Orlando playing sharp, jagged punctuations. Gordon's creative combination of the available textures—clarinet and guitar intertwining with percussion and strings as the three vocals gradually evolve into abstruse three-part harmony, continually repeating the phrase "You are no artist"—gives the piece a unique sound that continues on the largely instrumental "Aries," with only occasional spoken word emerging during its exploration of unison and counterpoint, delicacy and density, understatement and visceral energy.

A dark but still, at times, strangely beautiful look at a tragic life through the artist's own words, Van Gogh is a complex and challenging piece that only reveals its full reward on repeated listening.

About Alarm Will Sound