By JOHN EYLES
July 20, 2012
Sign in to view read count
Songwriter, singer and pianist Van Dyke Parks has so many claims to fame that together they would form the basis of an excellent "true or false" quiz. Consider the following: as a child actor, he appeared with such legendary figures as Lillian Gish, Grace Kelly and Alec Guinness; his first arranging job was "The Bare Necessities" for the Disney film Jungle Book; he wrote the lyrics for The Beach Boys' infamous masterpiece SMiLE, recorded 1966-67; he produced the debut albums of both Ry Cooder and Randy Newman; he collaborated with Joanna Newsom on the orchestral arrangements for her classic second album, Ys (Drag City, 2006). All true.

Despite those and many more comparable achievements, Parks is best remembered for his first three solo albums which were released on Warner Bros between 1968 and 1975—Song Cycle, Discover America and Clang of the Yankee Reaper. All three have now been re-released on the London-based label Bella Union... 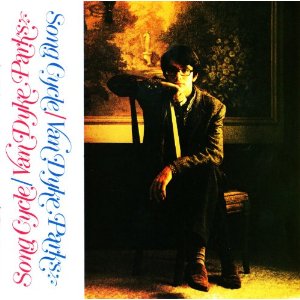 Parks recorded his first album in 1967 and it shows. At the time he was on the rebound from SMiLE, having withdrawn from that project after a heated argument with Beach Boy Mike Love who allegedly—and not without some justification—called Parks's lyrics "acid alliteration." Song Cycle is recognisably from the co-creator of SMiLE; although it lacks the vocal harmonies of the Beach Boys, it repeats many of SMiLE's distinctive trademarks such as the episodic structure of "Heroes and Villains" and a penchant for unexpected instrumental interludes from banjo, harp, harpsichord and the like. As its title implies, Song Cycle seems to have been planned to be heard as a totality rather than as a collection of individual tracks; in that respect, it owes as much of a debt to Sergeant Pepper as to SMiLE.

Songs by Parks are interspersed with cover versions, orchestral interludes and assorted oddities. Randy Newman's "Vine Street," opens the album and sets its tone; after an intro of the traditional folk song "Black Jack Davy" with banjo accompaniment, Parks is joined by an orchestra and occasional piano. His voice sounds tuneful enough but it is not often heard to best effect, instead being heavily reverbed or offset by instrumental effects. If anything, he sings with an air of ironic detachment rather than investing the words with any great emotion, probably because his lyrics rarely convey emotion, being instead a complex series of wordplays.

With its leftfield appeal, it is easier to say what Song Cycle is not than to pin down exactly what it is. It is not pop music, as its songs have few melodies that linger on after they have been heard. It is not rock music, the dominant sounds being orchestral rather than electric. At the heart of the album are two tracks that typify its eccentric charm: the first, oddly called "Van Dyke Parks" is actually a brief version of "Nearer, My God, To Thee" (allegedly the last tune played as the Titanic sank), overdubbed with battlefield sounds from the Vietnam war. "Donovan's Colours" conceals the melody of "Colours" by Donovan in a jingly-jangly version that owes more to Loony Tunes than to the Scottish troubadour. Yes, very very 1967. 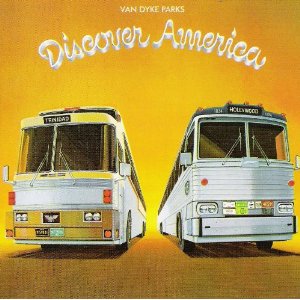 At the time of its release, Song Cycle was supposedly the most expensive album ever recorded, but it did not sell in great quantities. Oddly, Warner Bros placed adverts in the music press offering two replacement copies to anyone who had bought the album and worn out their copy, the second copy being to educate a friend... It was five years until Parks released his second album, Discover America, and it was in complete contrast to his debut. Leaving the psychedelic eclecticism behind, the second album contained no Parks compositions, but still managed to retain his sense of "otherness." Parks opted to focus on reworkings of old calypso songs from Trinidad and Tobago. With a track listing reading like a who's who in America as seen from abroad, the album was steeped in the sounds the Caribbean, with liberal use of a steel band adding to its authentic feel. Compared to other albums from 1972—Ziggy Stardust, Exiles on Main Street, On the Corner...—it still sounds like a breath of fresh air, gentle, charming and relaxing.

Discover America opens to the sound of Mighty Sparrow's original version of his composition "Jack Palance"; in 1974, Parks would produce the Mighty Sparrow album Hot and Sweet as he continued to embrace calypso. With "Bing Crosby," Parks takes over vocal duties; sensibly sticking to his natural tone and accent, rather than adopting a strong Caribbean accent which could have been patronising and somewhat ridiculous. The album's most renowned track and its best---still performed in concert by Parks—is "FDR in Trinidad," a charming contemporary song originally recorded by Attila the Hun (!) to celebrate Roosevelt's visit to the island in 1936; a self-confessed goat, ("I eat everything around me") Parks may have latched onto the song when it was recorded for Into the Purple Valley by Ry Cooder in 1971, an album for which Parks provided keyboards. On his version, Parks is accompanied by members of Little Feat—with Lowell George's guitar prominent—meaning the piece manages to be true to its roots while sounding of its time.

Little Feat also turn up in a trio of non-Caribbean songs that act as a funky (southern) US interlude, providing a change in the rhythm; the three are "Occapella" by Allen Toussaint, "Salin' Shoes" by Little Feat and "Riverboat" by Toussaint. The three songs hang together well, each having a languid laid-back mood enhanced by Parks' relaxed vocal performances, a mood entirely consistent with the rest of the album. After more delightful calypso, the album comes to a suitably surreal Parks-ian conclusion with a steel band version of Sousa's "Stars and Stripes Forever," one which sounds entirely fitting in context. 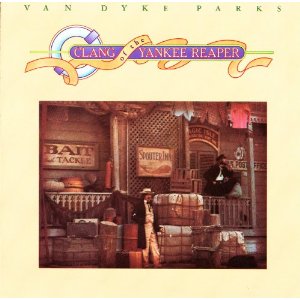 Clang of the Yankee Reaper

Three years on, Parks released the album that many consider one of his finest, Clang of the Yankee Reaper. Anyone arriving at the album after listening to Song Cycle and Discover America would immediately recognise it as a Van Dyke Parks album even though it is as different again from those two as they are from each other. For the first time on a Parks album, a band is credited, and quite some band it is, including Jesse Ed Davis on guitar, Bobby Keys on saxophone, Klaus Voorman on bass and Jim Keltner on drums. Keys' saxophone is prominent on several tracks, making it one of the album's trademark sounds, alongside Parks voice and the backing vocalists.

The title track is the only Parks composition here, and it is a beauty with a hauntingly memorable melody and lyrics plus a dramatic arrangement replete with those backing vocals and some poignant whistling from Parks. After that opener, there follows a typically eclectic set of covers, dominated by Caribbean calypsos such as "Pass that Stage" by Mighty Sparrow and "Tribute to Spree" and "Soul Train" both by Lord Kitchener. As before, lilting steel band accompaniment gives them an authentic feel. Despite the presence of the rock band, the pervading atmosphere of the album is one of nostalgic affection for the past, typified by the theatrical mood of songs like "Another Dream" by Sandpebbles and "You're a Real Sweetheart" by Irving Caesar. Sticking to Parks' idiosyncratic choice of finales, the album closes with a piece that claims to be "Cannon in D,"" but is actually Martin Luther's hymn "A Mighty Fortress is our God," bizarrely given a full-blown funk workout by the band, complete with horn section. In fact, it is an ending that neatly sums up Van Dyke Parks attitude—anything goes.

Together these three albums demonstrate that Van Dyke Parks is a real one-off who seems to live by his own rules, creating music that he is happy with despite what anyone else may think. And it works well.

Clang of the Yankee Reaper

Tracks: Clang of the Yankee Reaper; City on the Hill; Pass the Stage; Another Dream; You're a Real Sweetheart; Love is the Answer; Iron Man; Tribute to Spree; Soul Train; Cannon in D.