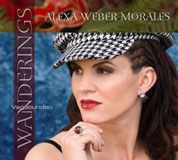 Alexa Weber Morales is a San Francisco Bay-area singer whose star is rapidly rising. She sings in French, Spanish, Portuguese, and English, and her lush, rangey, sensuous voice reminds me of Basia, another boundary-busting, powerhouse singer who made a huge splash in the early 1990s and has only recently returned.

For this second CD, Weber Morales includes jazz, bossa nova, salsa, funk, a whiff of R&B and even a touch of opera (as in the opening track, a sizzling re-imagining of the familiar "Habanera aria from Carmen). Vagabundeo/Wanderings also features a gospel choir, an a capella trio, smoldering horns, intricate percussion, dance-party tunes, and haunting ballads. Song sources include Ruben Blades, Edu Lobo, Tom Jobim, and a Mexican movie from 1948, while five intriguing Weber Morales originals round out the mix. Crisp arrangements by Patois Records label head Wayne Wallace enhance the joyful energy of this release.

Is this jazz with a pop/Latin sensibility, or Latin with a jazz/pop sensibility? In purist circles, "pop is a four-letter word, but how crucial is that when music is so high-spirited and rendered with such care, talent, and heart?

Vagabundeo/Wanderings is a good name for this wide-ranging, engaging journey. If Weber Morales ever decides to tackle some jazz standards, she could blow away half the current crop of vocalists. At least.