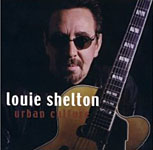 Louie Shelton is a talented session guitarist who's appeared on countless pop albums with the Monkees, Barbara Streisand, Marvin Gaye and many more. Two of Shelton's more memorable contributions were the killer opening segment on the Jackson 5 hit "I Want You Back" and the tasty guitar solo on Boz Scaggs'"Lowdown."

In 1996, Shelton delivered a fine solo release ( Guitar ) that was edgy enough to please fusion fans but catchy enough for contemporary jazz radio. Unfortunately, Urban Culture is too obviously targeted at the latter.

Not that Urban Culture is a terrible album. Shelton's fretwork rescues some of these songs from the snooze jazz abyss, and his playing throughout seems derivative of Wes Montgomery. But the mechanical drums and somnolent synthesizers conform to the smooth-jazz formula. And the boundless talents of Flecktone bass playerVictor Wooter go completely to waste in this restraining format.

Urban Culture is similar to some of Lee Ritenour's more formulaic pop-jazz . To me this stuff is the jazz equivalent of fast food, but if you're into unobtrusive background music with mildly funky beats and catchy guitar playing, this one should float your boat. The opener "Mandalay Sunset" sounds like a Steely Dan instrumental with a Kenny G-ish sax solo. The songs " "Boogaloo" and "Street Walkin'" are harmlessly funky, and "Inner City Blues" swings harder than most contemporary jazz.

Nevertheless, fans of Guitar will mostly be disappointed by Urban Culture. Louie Shelton is capable of much more substantial music, and diehard jazz fans may want to wait for his next release. He will reportedly dabble in straight-ahead jazz on that one.