By HENRY SMITH
October 1, 2008
Sign in to view read count 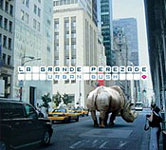 La Grande Perezade is a "mini big band" outfit comprised largely of French jazz and improvisational figures, though "big band" does not begin to describe the sounds within Urban Bush. Conductor and writer jean-Baptiste Perez's compositions stroke broadly across genres as diverse as anthemic fusion rock, free jazz blowouts and brief horn duets without ever losing a sense of unity.

Take the first track, "Le Tic-Tac de la Bombe," which starts off nice and droney, building as elegantly as an Ellington ballad played at half speed. Similar in style to some of Anthony Braxton's Arista efforts, the drums enter with a marching band rhythm that provides shape of a different kind, allowing the horns to grow and swell in the background with an almost minimalist vibe. Sylvain Choiner's guitar solo is a brief but fiery contribution.

When "Fetide?" comes in it becomes clear that this band's modus operandi is far larger in scope than the first track may have suggested. A one minute airy horn duet of completely free wheeling, raspy material not too far afield from the more feverish efforts of Studio Rivbea-era improvisation. Track three, "Buck et Neluji - Part I" starts off with a somewhat dirty poetic recitation over which a French Serge Gainsbourg sound-alike enters for some multilingual music of a different kind. "Part II" even has a hint of Latin rhythm beneath it while also incorporating some of Masada's Klezmer-infused horn lines.

"Gross Fatigue" opens like Ascension (Impulse!, 2000) before a Marion Brown like catharsis belches out from the mix, setting the stage for a battle between single improvised lines and full band explosions which include vocal cries from nearly all members of the group.

"Ou Creve - Intro" sounds like an Art Ensemble of Chicago outtake, as accompanied by a group of chanting monks, and provides a nice showcase for drummer Emmanuel Penfeunteun. The title track moves from Derek Bailey guitar scrapings to full on female rock vocals, miraculously without sounding the least bit disjointed while "Fete de Trop" is another brief horn duet, and representing some of the least constrained and most beautiful work on the album.

With the controlled freedom of a group like Bloodcount, only with a far broader palette of sounds, the last two tracks, "In Sea" and "La Sorciere/ Fete des Meres" contain some of Perez's finest arrangements for an ensemble whose talented musicianship and brave genre jumping should be applauded.