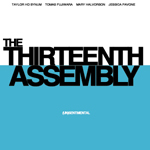 A fountainhead of creative improvised music, Brooklyn is witness to countless transitory ensembles and ad-hoc line-ups. What separates the Thirteenth Assembly from similar efforts are its deep roots. No less than three veteran units can be found at the core of this collective: Bynum and Fujiwara's duo; Halvorson and Pavone's duo; and Bynum's trio with Halvorson and Fujiwara. Additionally, all are key members of Bynum's sextet. Despite his prominence in the group's lineage, Bynum is not the Thirteenth Assembly's leader; each member takes a hand in the song writing process, sharing equally both as author and improviser.

They embrace a wide range of stylistic territory on their relatively brief (37 min.) debut, (un)sentimental, exploring a plethora of genres and styles without falling victim to dilettantish post-modern eclecticism. Unlike similar attempts by some of their forebearers, their seamless integration of multiple genres never feels forced or contrived.

After the brief introductory fanfare of Halvorson's chamberesque "Unfinished Ballad," Pavone's soul stirring "Army of Strangers" kicks the album off with a funky little tune that careens ebulliently despite the lack of a bass instrument, driven by Halvorson's sinuous melody lines and Fujiwara's pithy backbeat. Setting a precedent for the rest of the session, each member takes tantalizingly brief, thematically concise solos that balance individual expressionism with formal constraints.

Borrowing elements of Afro-Cuban music, Fujiwara's "Chantal" yields a delicious pan-global hybrid with a rousing deconstructed finale. His lithe tone poem "Never Before" finds accord with his peers' more impressionistic fare, such as Halvorson's "P#2" and Pavone's "Hate Fields." The former weaves the kaleidoscopic tendrils of a lush melody into a richly textured mosaic, the later unveils a mellifluous meditation brimming with opulent harmonies, ending the album on an introspective note.

The unified ensemble sound of the Thirteenth Assembly is centered around empathetic communication and a willingness to subvert ego for the good of the group; there is no grandstanding here, only four longstanding friends conspiring to make adventurous yet accessible music. A stunning achievement, (un)sentimental demonstrates the endless possibilities of contemporary music by players at the top of their game.