By JEFF STOCKTON
December 15, 2006
Sign in to view read count 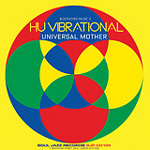 Drum circles in the park might get a bad rap, but for centuries the spiritual life of human beings has been synced to the sound of the drum. Any culture that puts meditation at the center of its practice has used a steady pulse as the vehicle for expanding consciousness and breaking through the temporal world.

Percussionists Adam Rudolph and Hamid Drake go way back to the days of the Mandingo Griot Society, a group formed in Chicago in the late '70s around West African kora master Foday Musa Suso, a true musician, historian and perpetuator of the oral tradition. This music merged with jazz in the person of Don Cherry, an artist who influenced Rudolph and Drake directly. Cherry's dedication to fusing rhythm with the sound of natural instruments—played by hand and made from wood, skin, gourds, clay and so on—gave rise to world beat and permeates the soundscape created on Universal Mother.

This third release from Hu Vibrational shows an evolution into a slightly more electronica-inspired drum 'n' bass (minus the bass) style of cool trance-inducing groove. Rudolph and Drake are joined by Brahim Fribgane, who contributes a third set of hands and lungs and Joshua Spiegelman, whose bamboo flute adds windy embellishment. The selections are brief and varied enough not to wear out their welcome. By the time "Red Ochre Cowrie arrives near the end of the program, the music is as propulsive and heavy as anything from Led Zeppelin. Universal Mother is tuned to the heartbeat of the universe.