BY BARRY WITHERDEN
February 17, 2018
Sign in to view read count 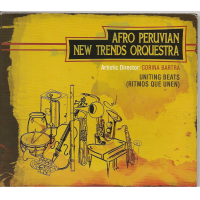 Most of us are familiar with Afro-Cuban styles, which jazz has flirted with and sometimes wholly embraced since at least the 1940s. The Afro-Peruvian label is probably unknown to most, but Corina Bartra, the director of this project, has been working in this genre for decades, also encompassing various other Latin American traditions, including Brazilian. For some, small doses of Latin jazz may be sufficient—all that clattering percussion and ping-ponging congas and bongos can quickly pall. But Bartra gets the balance spot-on with the APNTO. All but two of the pieces here are her compositions, and she and her fellow-arrangers produce exciting charts with rich textures. Lots of fine solos too. Regrettably, it's near impossible to tell who is who, apart from Bartra's regular colleague Rodriguez, but there are several impressive trumpet and tenor outings. This is recommend unreservedly to fans of Latin jazz and, even for others, as the high quality of the solos and ensembles make it worth considering. For sampling, good bets are: "Aruhe," "Guajira Son" or Amadis Dunkel's "Minor Misdeaminor" as varied examples representative of the band at its best.