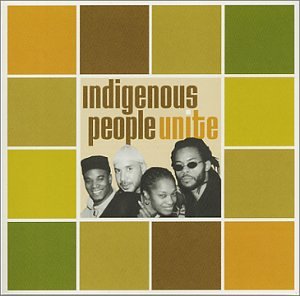 For those unfamiliar with Marc Cary and his various ensemble fronts, "Indigenous People" is Marc Cary's groove-based ensemble that plays a varied repertoire of groove cuts taken from the loom of "African diasporic music." So then there is a melange here of Afro-Latin grooves, Jazz, African Folk, the Go Go music of Cary's youth, and raw, unadulterated funk; all rendered in the eclectic and freewheeling spirit of Cary and "the IP crew."

The latest Indigenous People assemblage features the cast of the Marc Cary quartet that Cary tours with, which adapts to either an acoustic or an electric situation on the road. Here on Unite, Cary mans the Rhodes organ, Tarus Mateen gives strong support on electric bass, and Y.C. Laws is a melodic voice on flute as well as the conga player. DC native and drum grrl Camille Gainer plays drums and now, with this record- there is the inclusion of one Marvin Sewell on electric guitar. He figures in prominently on several tracks and is given both comping duties and solo space of his own. Those who aren't inclined towards the more twangy "gittar" style of jazz guitar represented by Sewell, George Freeman, Blood Ulmer, and others may find Sewell's presence, which isn't exactly subdued- a detraction.

Twangy, fon-kay, funked out- whatever you want to call it, these are operative words on UNITE. In fact, the cameo of Mr. Sewell on UNITE points in no uncertain terms towards a more definite retro sound than on the previous IP record. He comes in to add a certain fon-ky flavor that Cary is no doubt hot to realize, whether he's going to get help or not! Indeed, Cary's own commitment to digging deeper into the sound he's digging out of the 70s is shown in his increased probing of all of the wavelength effects that may be tweaked out of the Rhodes. The Rogue Moog synth is also in the mix.

Indeed there are a lot more sounds like: "wah- wah", "wooow" "whh (you get the idea) from Cary here than on the other IP record. Not to mention that the grooves are just a little more in the gut than on the previous record. The other IP record tended more towards ethereal "World" grooves with hand percussion happenings- whereas this is getting on the grittier side and is more about keeping a solid backbeat going on the kit.

That said, telling in fact is that in terms of aesthetic, this record is more closely aligned with Cary's 70s-looking "Rhodes Ahead" than with the previous IP record. The majority of the pieces on here are in line with a Soul Jazz/Jazz-Funk aesthetic, and the record of course is replete with the proper instrumentation for a recreation of THAT whole sound.

Rest assured THIS is not "complacent" groove music however. This is not mere background music for love-making nor is it car music that only seems good as long as you're in motion. No, while this record could fulfill either of these functions in about as stylish a manner as possible, it's more complex sound means that it's going to find play in a greater scope of circumstances than just the obvious suspects for a groove situation. That said, however- there are a couple of bona-fide "party tracks" here.

The music on board here is often soulful and soothing, and is always stimulating to some ascertainable extent. There are new compositions on board here but some of Cary's set pieces on the road are present also. One staple set piece that anybody who has seen either Marc's acoustic or IP outfits play is "Cd changer." "Cd changer" of course (if the title does not give it away) is a tune based on "forwarding" through, sequencing memorable Cary vamps and melodies of the past few years. It is a thrilling piece when played live; unfortunately the cut here doesn't capture half of THAT energy, but it is still good that it was put onto record for his fans.

Another set piece is "Take Me Higher." Another suggestive title; it is a a simple but lilting melody that is ideal for the breathy and melodic voice of YC Laws' flute. Speaking of Laws, his flute is a soothing presence on "When I See You I see Me"- a very repetitive but nonetheless effective track.

The rest of the music is pretty varied, with some commonality therein. "Woo" offers the most mellow statement in the pack here; Marvin Sewell plays jagged refrains and Marc Cary solos on Rhodes intently as YC blows the pleasing melody again and again. Whereas, "The Indigenous Circle" sounds the most consciously retro(also longest track at 8:38); it could pass for soundtrack material in the vein of Herbie Hancock late 70s (e.g. "Death Wish")- the difference is there is more freedom for improvisation here- but don't expect the strings sounds to not assert themselves over the funky beat still. It will most certainly put you in the mood to watch some 70s cop movies or some movies of the "Blaxploitation" genre, like "Superfly" or "Black Apollo." Sewell's scratching chords and Gainer's cymbal exploits are too reminiscent not to.

The real variety comes in later on this record; "Terra" is a Carribbean-influenced track that is very pleasant and has some of the most melodic solos on board, while "A Poem Meant to Celebrate" is actually a rap track featuring Sharif Simmons on the mike. There are also two introspective solo tracks by Cary (a real contrast to rest of the record); "Midnight Raga" on synth, and "Two Dimension" on piano (the lone piano track, and a somber one). "Dance to the IP Beat" meanwhile is the most blatantly extroverted track; it features vocals by Cary exhorting his fans to get on the IP train- it sounds a little forced but those who don't understand why Jazz musicians don't try to connect more with fans (including this writer) will respect the boldness of Cary for doing this. (Why don't we have more jazz groups with iconic names? Can we agree that simply naming a band after the leader or leaders is oftentimes done unconditionally and is rather conservative?)

In sum though, UNITE is a good record for anybody out there who wants to get ahold of some retro-70s sounds that are updated with, among other things, a greater commitment to improvisation. Furthermore, anyone who loves Rhodes organ in a jazz/funk context will probably love this record; Marc Cary is fast becoming one of the leading exponents of reviving the Rhodes (along with Jacky Terrasson, George Colligan...) in jazz. He seems to understand the unique demands and character of the Rhodes well. Moreover, he's thrown his Rhodes into the mix with an ensemble that lets it shine and gives him a fine grooving rug to play above.

Of course- this IS not exceptional ground-breaking music but it WAS a worthwhile effort by Cary to get out some music that he and the IP crew are quite obviously FEELING. Kudos to Cary for re-investigating this portion of the musical past that he has been moved by. Rhodes organ funk was written off for a while as sounding jaded, but is now coming into light and into better perspective because of the played reassessment carried out by a Marc Cary.