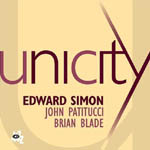 Artistic evolution is an interesting phenomenon. Emerging musicians, filled with the brashness of youth, are often more focused on chops, energy and complexity. But as many mature they evolve into players more concerned with space and profound simplicity. Edward Simon is a strong case in point: the pianist's earlier albums are filled with detailed compositions and an almost pathological approach to blending his South American roots with the sophisticated language of modern jazz.

Recently he's been paring down his approach, and Unicity represents his most compositionally stripped-down effort to date. But it's the very brevity of the charts here that frees Simon, bassist John Patitucci and drummer Brian Blade to create some of the most evocative music of Simon's career.

Shorter charts needn't imply any less challenge when it comes to improvisation, nor do they suggest a lack of spirited energy. In fact, with less detailed roadmaps, the trio is forced to rely even more on interpretive interplay and the kind of dynamics that can only occur when the musicians are speaking with a single voice.

"Pathless Path" revolves around a simple ostinato pedal point that's reminiscent of Keith Jarrett's Changeless (ECM, 1982). But Simon contrasts with Jarrett's stream-of-consciousness aesthetic through an equally emotive but more thoughtfully evolved chordal approach where the drama builds imperceptibly, noticeable only when Patitucci and Blade bring the dynamics back down and Simon becomes more linear.

"The Midst of Chaos" could suggest greater turbulence, and while it's the most exuberant track on the album, it's a centered piece featuring Patitucci's best solo of the set. Simon, while retaining his characteristically deft touch, is at his most intense while Blade—always a vibrant player—manages a unique combination of muscular power and refined elegance rarely experienced since Tony Williams passed away.

Frederic Mompu's dark and brooding "Prelude N.9," primarily a solo vehicle for Simon, allows him to surrender himself to the needs of the song. When Patitucci and Blade come in for just a third of the tune, their support is so understated that it's more felt than heard—noticed more, in fact, when they leave Simon alone again at the song's end.

Simon includes two versions of "Abiding Unicity." The first is a free-flowing affair: a tone poem with fluid time. The reprise, equally open-ended, bears a stronger pulse and more clearly defined changes. Together they demonstrate how the same idea, approached perhaps only hours apart, can yield diametric results. Unicity may find Simon paring down his approach, but it also finds him sounding emotionally deeper and more compelling with each successive release.