Home » Jazz Articles » Unhinging and Swinging Mythology at the Opera

Unhinging and Swinging Mythology at the Opera 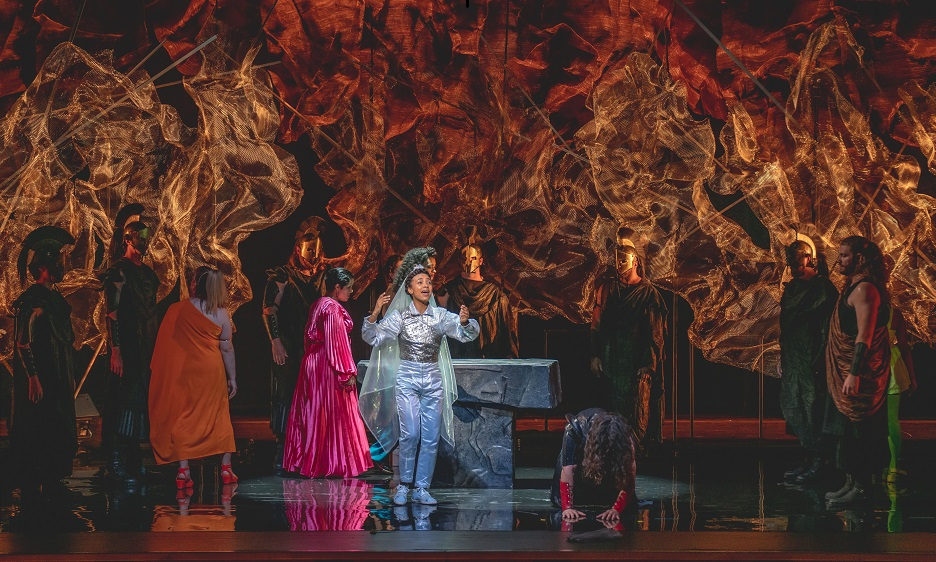 By Josef Woodard
March 4, 2022
Sign in to view read count

With this semi-orchestral body of work, now including his first opera foray, Shorter has found a fruitful way to bridge his compositional prowess and his almost dogmatic belief in the power and importance of improvisational spontaneity.

When last I interviewed Wayne Shorter, in his panoramic view-endowed Hollywood Hills home, the ostensible primary subject was his then-new and ambitious three-disc-plus-graphic-novel project, Emanon. But his ever active, creatively restless mind kept drifting—as it is wont—to his music room, the laboratory for a grand project then obsessing him. That mega-project was his first opera, ...(Iphigenia), in collaboration with his gifted comrade, Esperanza Spalding. The fascinating brainchild was birthed last fall in Boston and at Kennedy Center and had its fortuitous Southern California debut in Shorter's adopted hometown turf, at Santa Monica's Broad Stage, for a too short, two-night stand.

The summary verdict? It's a genre-defying, idea-fueled and medium-stretching revelation. You can quote me on that.

Given the complexity of the endeavor, one can see why Shorter would be consumed in creating this new world and realizing his teenaged dream of writing an opera, along with Spalding, who took time off from her duties as a Harvard professor to finish the project. In the conceptual department, the creators deal with the core matter of mythology—embedded in the title character, sacrificed for "the good of Greece," while also stressing an anti-mythology message. Seeking liberation from repressive archetypes and stereotypes, in terms of feminism, pacifism and even musical expression, is central to the opera's mission statement.

Spalding, in fact, is only one of five "Iphigenia" characters, and doesn't even appear on stage until halfway through the production. She is the innocent but ultimately enlightened heroine, and the Iphigenia encoded with the "open tense" imperative—she has no future and no past. Spalding takes on both lithe scored melodic lines and freely improvised sections, in which she leads the vocal charge of the other Iphigenias (singers possessing more trained, operatic voices, for contrast).

One operatic tradition holding true here is the importance of collaboration and contributions of many forces. Director Lileana Blain-Cruz keeps the female protagonist and soldier contingent in fluid motion, against the enticing backdrop and gizmos of iconic architect Frank Gehry's stage design. Contemporary vocal ensemble expert Carolyn Shaw has devised alluring and unconventional matrices for multiple voices, and additional text comes courtesy of US Poet Laureate Joy Harjo and others.

Instrumentally, Shorter draws on a familiar palette he has been honing for several years (and as heard on Emanon's "Pegasus," "Lotus," and "The Three Marias," in which he combines through-written orchestral scoring with looser jazz-lined contributions from his quartet-mates, pianist Danilo Pérez, bassist John Patitucci and artful dynamo drummer Brian Blade. With this semi-orchestral body of work, now including his first opera foray, Shorter has found a fruitful way to bridge his compositional prowess and his almost dogmatic belief in the power and importance of improvisational spontaneity. In a sense, the telling precursor to ... (Iphigenia) was his 2013 piece, Gaia, featuring Spalding as the intrepid vocalist in cahoots with components from the Los Angeles Philharmonic.

With ... (Iphigenia), Shorter leans into semblances of standard operatic apparatus—sometimes suggesting Richard Strauss' tensions and twisted variations on Aaron Copland and Maurice Ravel, for instance, but affixed to his own characteristic Shorter-esque brushstrokes. But the musical menu here brings plenty of fresh ingredients and wild turns, especially in the cathartic finale, with the jazz trio on stage blowing freely and wildly as the chamber orchestra—conducted by Clark Rundell—tends to its notated music duty in the pit. That fragile moment, with freedom both in accord and in argument with structure beautifully. illustrates a central theme in the opera, but is also a thrilling sonic head trip to behold, itself worth the price of admission.

It's interesting—and encouraging—to note that the Shorter/Spalding opera joins the ranks of a few high-profile operas by black composers with jazz in the DNA, like Anthony Davis Pulitzer-winning Central Park Five—premiered by the Long Beach Opera in 2019—and Terence Blanchard's Fire Shut Up in My Bones, which opened the Metropolitan Opera's 2021-22 season.

In some way, ...(Iphigenia) is the more inventive and groundbreaking sensation of the three. It makes for a subversive yet sumptuous night at the opera, with a self-defining sense of identity and artistic logic.

After the Saturday night performance at the Broad, Shorter came onstage on a wheelchair (health problems have caused him to slow down and avoid the saxophone). After humbly accepting deserved ovations, the legend spoke: "Thank you for allowing us to bring our trip to the Santa Monica Center for creative breakthrough. When we were little kids playing outside, in a vacant lot or wherever, we would just play all day long. We would pretend to be the Green Lantern or something. Our parents would come home and say "what have you been doing?" We'd say "nothing." That's what I want to hold on to—nothing."

He left us with a typically Shorter-esque post-Zen koan: "How do you rehearse the unknown?"