By BRUCE LINDSAY
October 6, 2016
Sign in to view read count 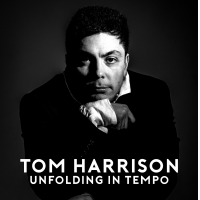 London-based alto saxophonist Tom Harrison leads a tight and imaginative band on Unfolding In Tempo, a live album of "reflections on the Ellington/Strayhorn Canon." After three years intense study of Ellington and Strayhorn, Harrison has selected a mix of tunes that display the breadth of that canon, from the famous to the lesser-known, recorded at the Everyman Theatre in Cheltenham and the Pizza Express club in London's Soho.

The first track, recorded in Cheltenham, is the most famous—"Take The 'A' Train." Cleveland Watkiss opens proceedings with his vocal impression of a train pulling out of a station: the image is more rural English branch line than Manhattan subway but it's fun. The "A" train, he tells the crowd, is the quickest way to get to Cheltenham—although he rather destroys the illusion by revealing that he travelled to the gig by car. Never mind, for there's a lovely, laid-back, quality to the track as singer and instrumentalists gradually interweave, gain confidence in their interactions and build up to a swinging mid-tempo rhythm over which Harrison delivers the first of many fluid and intricate solos. Harrison makes way for the rhythm section—pianist Robert Mitchell, bassist Daniel Casimir and drummer David Lyttle—to have some fun with the tune, shifting tempo and engaging in yet more locomotive impressions.

Other tracks offer plenty of scope for each band member to take the spotlight, but Harrison and Watkiss grab most of the attention. On Mercer Ellington's "Things Ain't What They Used To Be" there's another excellent alto solo (over Casimir's cool walking bass) and a hip Watkiss vocal. Watkiss is clearly skilled at engaging an audience, whether he's encouraging the Pizza Express crowd to join in with his scatting or telling them the tale of how he got into jazz.

Sound quality on this live recording is excellent, voice and instruments coming across clearly. The atmosphere of the gigs also comes across very well, especially Watkiss' interactions with the audience, which responds with more enthusiasm and gusto than might be expected from a jazz crowd. As is often the case with live albums, some of the audience participation is less fun to listen to than it presumably was to be part of, but it serves to emphasise the live atmosphere.

Harrison closes the album with a solo version of Ellington's "Warm Valley" from the band's Pizza Express gig. Apart from the occasional clink of a glass, the audience listens in silence to Harrison's emotive playing then bursts into applause as he finishes—as it should, for this is a lovely performance.

Take The ‘A’ Train; Things Ain’t What They Used To Be; The Minor Goes Muggin’; My Little Brown Book; Solitude; The Intimacy Of The Blues; Warm Valley.