By Ian Patterson
September 17, 2014
Sign in to view read count 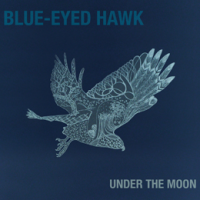 It all blends wonderfully, like a heady cross between Bjork, Patti Smith and Moetar. For label seekers, art-rock might satisfactorily describe Blue-Eyed Hawk's aesthetic, but boxes aside, this is powerfully emotive, seductive music.

Kinsella, whose striking recordings with vocalist Sara Beuchi (Sessile Oak, Self Produced, 2009) drummer Alex Huber (All This Talk About, WideEarRecords, 2012) and with Thought Fox (My Guess, Diatribe Recordings, 2013) have positioned her as one of the most adventurous of modern singers, has never sounded better -in total control of her instrument. The vocalist's confident, nuanced contours weave a mesmerizing spell; so too her poetic lyrics, notably on the slow-burning pop anthem "Oyster Trail." Loops and sci-fi effects soon give way to ruminative guitar and a fat pop beat, over which Kinsella unfolds her beguiling pastoral narrative of crying whales and flying nightjars. Jurd's strong, lyrical intervention lifts the music from the ethereal to the epic; a captivating six minutes is gently crowned by a multiple-voiced chorus as soothing as lullaby.

"Somewhere," a delightfully twisted re-imagining of "Over The Rainbow" weds grungy riffing, pummeling drums and effects-altered trumpet to Kinsella's mischievous vocal. The twittering birds of the airy coda segue into "Aurora 5am," an achingly beautiful acoustic ballad where Kinsella and Jurd dovetail in meditative mantras. Guest Tom Herbert's bass ostinato injects grooving pulse to the curiously catchy "Spiderton," where once again Kinsella draws on nature for her inspiration.

In the past, Kinsella has reworked the poetry of Ted Hughes and T.S. Elliott and she steers the quartet in bewitching fashion through W.B. Yeat's "O Do Not Love Too Long." Yeats, incidentally, provided the inspiration for both the band's name and album title. Roth's poignant arrangement of the late Seamus Heaney's poem "Valediction" is an album highlight, subtly blending folkloric and hymnal elements; Dick's spare piano lines frame Kinsella's heartfelt delivery on this lilting ballad. The vocalist's arresting improvisations color Roth's dreamy, quasi-Frisellian "Reflections in the Spiral." Kinsella's voice grows, pulling the quartet in her wake towards a stirring finale, driven on by the consistently impressive Jurd.

Carefully crafted studio production/sonic sculpting add urbane luster to thoroughly memorable compositions, lovingly delivered. Under the Moon is, in every respect, a stunning debut that sinks its talons deep.