Maximize your visibility at All About Jazz by upgrading your musician page from standard to premium. With it, you'll receive All About Jazz home page exposure, a highly stylized / ad-free musician page with bonus features and benefits, an ad, plus you control where you sell your music and so much more.
Learn More
118 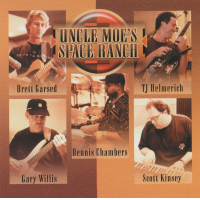 I will have to say this first off, Whoa! This funked-n-free-jam fusion splash is a tricky ride. Though truly off-center and extremely innovative in many solos and song structures—you gotta love this releases overall groove. Everybody seems wide open, slammin,' chops-laden, pumpin' and hard groovin'—and 100% slick! It is a mine field of genius, crunch, technical feats of fusion and best of all—full of soul and fire. This is no limp-wristed, rag doll fuzak. No! GnHnWnCnK have crafted a must-hear, nouveau fusion of jazz/funk/rock and treatments. If you dig GnH or Tribal Tech then just buy this. As Tribal Tech's Rocket Science was one really wild excursion, so too Uncle Moe's Space Ranch will have you in orbit above Planet Trippy's Freaked Fusion Restaurant.

Again we have that Weather Report on steroids wall of fused jazz colliding with GnH's Under the Lash of Gravity type of brutality and monster-sized stompings. This is not dinner music nor background dribblings of jazz. UM'sSRanch is strictly for those hip to the trip of loud, fast, and explosive. Enjoy axes dripping with riffs, bass that delivers seismically , drums that attack the primal bedrock and keys that will tie your ears in knots. Even Virgil Donati pops in for some percs too.

2001 has been a year for fusion to stretch itself out into daring new territories of expression. I listen to this GnH release, T Tech's latest and McGill/Manring/Stevens' +/-release and I see a new kind of fusion rock coming into being—free fusion. I wonder what is next. I wrote my pal Brett as to what-in-the-heck kind of effects and and/or pedals he and TJ were using to create the novel sounds found herein. He informed me he was just playing through his fav LINE 6 settings but TJ had recorded a solo to vinyl first and then TJ/DJ scratched it in for the final mix. Unreal! These guys never cease to amuse and amaze me. For those of you wanting to hear that Exempt and Quid Pro Quo sound just skip to the outro track for a deep dip into GnH nostalgia. Minx will also stir those classic GnH neurons too. All other songs will be a brand new experience I heartily recommend. If you want cool fusion that rocks head-to-head with anything else out there—then check into Uncle Moe's Space Ranch. Head rushes and whole-body shivers included with assorted solos. Bravo mates and dudes, izza good'un! Eh? (Beware hidden weird bonzodogband zappa sophomoric castrated gnome tracks.)<