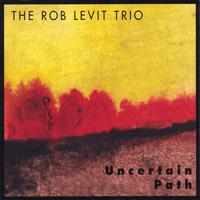 If "guitar" was a musical style, Rob Levit would be at the top of it. On the one hand, he is a jazz guitarist who can take a basic melody and turn it outside in to explore its inner beauty or reveal its seamy underbelly. Then again, he can rip off some of the fastest licks this side of anyone or draw out a single perfect blue note until the tension rises to a feverish pitch. He is also equally impressive playing an elegant classical line or taunting the gods of heavy metal thunder with searing leads that cut through anything in their way. His latest offering, Uncertain Path , showcases what amounts to a multi genre power guitar trio that switch and blend styles, often times within the same cut.

Backing Levit are upright bassist Amy Shook and drummer/percussionist Frank Russo. Shook is the bassist to match Levit's eclectic style. On the wild electric cooker "M-Dive," she amazingly equals Levit note for note and is just as at home elegantly rendering beautifully subtle melodies on Sting's "Fields of Gold" and "Ballad #3." Russo is likewise able to handle the program in flawless fashion. He evidences a quick rhythm that keeps up with Levit's rapid but conventional jazz picking and subtle blue notes on "Singularity" and then displays an open style that allows the trio to explore the freer but lyrical "Moving Closer."

Bob Marley's "Waiting in Vain" also features some excellent drum and bass work as the rhythm section maintains the song's credibility while Levit electronically explores its outermost fringes until he is brought back to the simple melody. The title cut hesitates down an "Uncertain Path" as drum and bass are joined by a quick flurry of jazz guitar notes until they find a comfortable groove that has Levit playing a long sustained blues riff until things again become a bit more uncertain. "Footprints," another cooker, begins as an intriguing jazz piece but then morphs into a super guitar rocker. Levit contorts the theme and wrings it until it screams while Amy lives up to her name; shaking my double 15" woofers with reckless abandon. Throughout, Levit shows an uncommon mastery of both speed and melody that is derived from his jazzer's musical sense, rocker's flair and bluesman's soul.