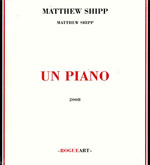 Vision does not come all at once. It builds over time and through experience. A component of vision is awareness, for if experience cannot be witnessed and objectified, then awareness might evade consciousness. How to break convention and move into directions that are untapped requires self-confidence and self-trust. Vision and creativity are inseparable, dynamic partners.

On his second solo album, Un Piano, pianist Matthew Shipp demonstrates his fearlessness in stepping outside of the standard that he has set for himself in the past to define yet another standard to support his continuation, through his indisputable interactions with the cosmos.

Bolstered by the grammar of his ornament-less language, nothing keeps Shipp from going inside the piano to literally mark a path to enter into his improvisations for this recording. Timed silences between one sound and another maintain the flow of the motion as well as the separation between them. The three minute overture, "Enter In," presents in an uncomplicated manner how to listen to the next forty-five.

Since his first solo album, One (Thirsty Ear, 2006), Shipp has refined the phases of his music's evolution. "Geometry" progresses logically from "Enter In" fully onto the keyboard. Thereafter, the recording unfolds and builds intelligently through masterful design.

Un Piano resembles a series of etudes ("Harmony of Apollo" reflects Bach's fugue variations). Yet, the overall album's fluidity and internal nuances are more than magnified. The distinctions between one musical notion and the next, not only from one piece to the next but within each piece, are sharpened. Additionally, Shipp brings attention to the concept that tempo mirrors the rhythm of the human body as much as written time signatures can denote pace.

Shipp's crashes through barriers throughout the recording, but heard in the exact middle of the recording ("Two Things Come Together"), a bass alternating two-chord ostinato culminates a piece that begins softly, has melodic, bluesy overtones, and a mid-range single note repetition pointing to the near future ("Exit Out"). The bass ostinato signifies improvisational epiphany, hinges back to front, past to present and old to new. The idea of totality surmounts duality.

Reformulating his straightforward language does not mean that Shipp erases anything. It means that precedence feeds spontaneity. It means that he has permission to press the sustenuto pedal for as long as it takes for the resulting impact to fade away ("Enter In," Cloud Chamber 6"). It means that he can touch the keys more expressively and clearly than ever before ("Linear Shocks"); it means that the phrases, chords and note progressions, which often can transmute rhythmically to tunes, are juxtaposed so abstractly that their articulation exceeds all expectations ("Whole Zone," "Cloud Chamber 6").

Shipp reaches sonorities similar to the ones he has discovered before, but has found them starting from a different standpoint, a wider yet more honed transfiguration of the 88-key spectrum within which he breathes. Un Piano not only indicates that one piano is being played on this recording but also that Matthew Shipp is playing it.