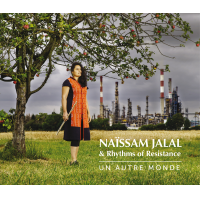 Some may see the flute as an odd one out in jazz. For France that certainly does not apply. France has Michel Edelin from the older generation and, for example, Magic Malik, Eve Risser, Sylvaine Hélary and Naïssam Jalal from the younger.

A flautist needs good sonic allies to embed flute sounds in and/or a strong groove to fly on. Naïssam Jalal, the Franco-Syrian flautist, has both to a high degree as part of her greater talents as composer and arranger. She has a broad cross-cultural musical background and more than ten years' experience with her group Rhythms of Resistance—comprising Franco-Moroccan saxophonist/percussionist Mehdi Chaïb, Franco-German cellist/guitarist Karsten Hochapfel, French bassist Damien Varaillon and French drummer Arnaud Dolmen. Un Autre Monde is a double album with a studio disc and a live orchestral disc with L'Orchestre National De Bretagne under the direction of French conductor (and viola player) Zahia Ziouani. Ziouani, who is of Algerian origin, had a formative training with the legendary maestro Sergiu Celibidache, and she has a broad practice with orchestras nationally and internationally.

The seven pieces on the studio recording show consistent fanning out and rich dynamics, from the alluring "Buleria Sarkhat Al Ard / Scream of the Earth Buleria" to the super drive of the bouncy and passionate "D'ailleurs nous sommes d'ici / Anyways, We Are from Here" with its hip-hop undertow. Jalal's flute is deeply embedded in the ensemble sound from the onset. She reflects and reformulates the heritage of the African-Arabic era of Al Andalusian culture on the Iberian Peninsula. It is the groundwork that enables her to stand out with both her flute playing and singing. Flute and voice are in Jalal's case two sides of the same coin. That's how she gives Mother Earth a climaxing expressive voice in this opening piece. The subsequent "Hymne à la noix / Hymn to the night" opens with wordless vocals and proceeds to an astonishing merged flute-saxophone line. The music then alternates between full ensemble sound and outstanding, economic and sophisticated solo moments. "Un sourir au Coeu r/ A Smile to The Heart" with its soft and sparse introduction, its superb phrasing of the singing and flute-playing and its beguiling ostinato turns out as a conjuring prayer, as it were Naissam Jalal's intriguing variation on Miles Davis' "So What."

"Samaaï Al Andalus" fuels this feeling. Jalal plays nay here in a dynamic and authentic way. It is carried by Hochapfel's bowed cello before passing into another flute-sax passage. Proceeding in the Arabic 10-beat Samai rhythm, it starts andante, accelerates, is superimposed on binary and ternary grooves, and ends up almost celebrational with a rotating, whirling dance feel. "Promenade au bord du rêve" houses a vigorous spirit. After having traversed different energy fields the piece brings the musicians and instruments close to each other in unison. It ultimately dives into present day topicality with "D'ailleurs nous sommes d'ici"/ "Anyways, We Are From Here."

The seven pieces of the first part of the album form a coherent suite with clear musical-thematic steps, connections and progression. Notably, the utopian pilgrimage sequence of tracks 4-7 is preceded by the suggestively entitled "Un sourire au Coeur / A Smile to The Heart," illuminating the leading human feel. The musical form of movement and coloring of the sequence has a clear relationship with emotions you can connect to.

What about the second, orchestral part of the album? Three pieces from the first part are bookended by two extended new pieces, the initial "Paysage de notre destin/Landscapes of Our Destiny" summoning the utopian spirits of the first part and the concluding haunting lament "Almot Wala Almazala" / "Death No Humiliation," the title piece of the 2016 Rhythms of Resistance album dedicated to the victims of the Syrian uprising. After Jalal's passionate multiphonic introduction the piece is orchestrally magnified in slow movements and ends in a fiery percussive outburst mingled with loud and determined human voices. It is the counterpoint to the initial piece, "Paysage de notre destin/Landscapes of Our Destiny." The music in that piece has a Gil Evans touch with splendid high-flying vocals, great guitar-bass interplay and beautiful guitar from Hochapfel. It is endearing, touching music of a special quality. Jalal succeeds in transferring her individual flute tone naturally to the orchestra as a whole. This festive opening is followed by orchestral reprises of three pieces from the first part: "Un sourire au Coeur/A Smile to The Heart," "Un monde neuf/A New World" and "Samaaï Al Andalus."

Un Autre Monde turns out as a masterful lucky strike that convincingly connects a series of different dimensions and forces: resistance and fighting for freedom, fighting for equality and diversity, heightening awareness for the decline of our environment, imagining a world beyond that—overall, the struggle to arrive at a healthier and more balanced way of using our resources. On the musical side, the album presents a convincing and impressive synthesis of different musical cultures very much in the line recently formulated by US-American-Iraqi musician Amir El Saffar.After all, through her dedicated real expedition from Paris through Bamako, Beirut, Damascus and Cairo, Jalal has absorbed Arabic modes (with Abdo Dagher, Fathy Salama and the group Om Al Agayeb) next to the western classical ways, jazz approaches manifested in her trio Quest Of The Invisible with bassist Claude Tchamitchian and pianist Leonardo Montana reviewed here as well as hip-hop ventures in the Al Akhareen trio/sextet with Franco-Palestinian vocalist-rapper Osloob. In the sense of Franco-Lebanese writer Amin Maalouf's "Les identités meurtrières," it is all interconnected and an integral part of a complex and dynamic multiple identity. Passionate and down to earth as she is, Naïssam Jalal has melted something unique and powerful from it and has yielded work that highly can be appreciated from various angles.