By JAMES NADAL
September 8, 2016
Sign in to view read count 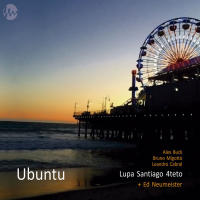 ADVERTISEMENT
Neumeister also composed the pensive "Night Eyes," where he converts the singular trombone into an orchestral foundation, then solos with aggression. "Two For Eleven," is an animated offering with the trombone and guitar enjoying thoughtful and captivating exchanges. Pianist Cabral penned "Trails," and lets the others battle it out before giving himself some room at the end. Built around sustained chords, "Enfim SUS," spins around the bop idiom, with intense propulsion from drummer Alex Buck and bassist Bruno Migotto. As required in a rhythm section, these two display an intuitive sense of urgency to keep the action in the appropriate direction. Following a transfigured rock time signature, "Eco System," plays fast and loose, and ends the repertoire on an upbeat.