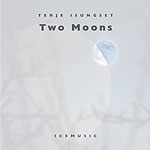 Two Moons is the third segment in the all-ice-instruments trilogy of the innovative Norwegian innovative percussionist Terje Isungset, that began with Iceman Is (NORCD, 2003) and continued with Igloo (All-Ice, 2006). Isungset began creating, composing for and playing on ice instruments after the 2000 Lillehammer Winter Festival commissioned him to compose music to incorporate the live sound of water beneath a natural frozen waterfall. He has since found exotic locations to feature the sounds of icy instruments including the Ice Hotel in northern Sweden's Jukkasjarvi, the Lake Shikotsu Ice Festival on Hokkaido (a northern Japanese island), and the All-Ice Festival in Geilo, Norway.

Isungset, a collaborator at heart, has found true partners for these icy sonic journeys. On Iceman Is he teamed up with Finland's Iro Haarla on ice harp and fellow Norwegian Arve Henriksen on ice trumpet, while on Igloo he worked with Norwegian master vocalist Sidsel Endresen.

Two Moons reunites Isungset with the singular Norwegian improviser, trumpeter/vocalist Per Jørgensen (a member of keyboardist Jon Balke's Magnetic North Orchestra). The album was recorded in two precisely built igloos—one for Isungset and one for Jørgensen—in a severe weather, with temperatures below zero. Two tracks were recorded live at the midnight outdoor concert of the first Ice Festival, and just as the last sounds faded, the sky cleared, and the full moon shone onto the onlookers, hence the title Two Moons.

It is easy to surrender to the mysterious atmosphere of this icy music. Isungset begins "Mountain" with rumbling percussion, while Jørgensen expresses wordless cries. At times he sounds like a modern shaman absorbed in a spiritual dance. Elsewhere he sounds simply like someone trying to get over the freezing cold. The music grows almost organically, with each track sounding like a logical evolution from the previous one.

The ice percussion instruments, made from ice that was specially delivered from Vatsfjorden in southern Norway, produce resonating sounds that are similar to udu drums and some African and Brazilian talking drums. On the ritualistic "Long Shadow" Jørgensen begins with fragile, slow and long single notes that complete his groaning growls. The interaction between Isungset and Jørgensen becomes more playful on "Solar Freeze" and part ceremonial, part comic on "Moon Sphere." Jørgensen alternates between quick, short blows and longer, whispery tones, while on the following "Darkest Hour" the distance-echoing ice percussion produces an eerie soundscape. The short and gentle "Serene" concludes the amazing sonic journey of these two adventurous musicians. It takes time to recover from such a unique musical experience.

Two Moons is a beautifully realized musical concept that comes with an equally beautifully designed package.