By JOHN EYLES
March 23, 2016
Sign in to view read count
Swiss composer and cellist Stefan Thut was born in 1968. Trained at the Lucerne Conservatory then at Boston University School of Music, he is now based in the Swiss canton of Solothurn. After experiences in new and experimental music, improvisation and noise he started composing, writing scores.

A member of the Wandelweiser group, as an interpreter Thut has premiered solo pieces including compositions by fellow members Jürg Frey, Radu Malfatti and Manfred Werder. Two of his own compositions figured on the five-disc box Wandelweiser und so weiter (Another Timbre, 2013) Among other places, his scores have been realised in Dusseldorf, Tokyo and New York. He has also performed with the ensemble incidental music in Berlin, Brussels, London and Zurich.

Thut's discography is fairly slim, with releases being rare or intermittent, so the two contrasting recordings below, released on different labels, in rapid succession, represent a positive flurry of activity... 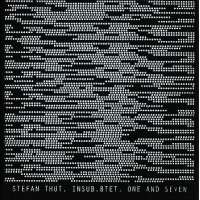 Stefan Thut
One and Seven
INSUB
2016

The title of this piece "One and Seven" refers to its use of one voice and seven instruments, which here are cello (played by Thut himself), hurdy-gurdy, violin, harmonium, bowed metal pieces, electric bass and snare drum. Alongside Thut, the ensemble includes INSUB label curators Cyril Bondi and d'incise. The one fifty-five-minute track opens to the unaccompanied voice of Antoine Läng who sings a single sustained tone that he then repeats, establishing a pattern that the instruments soon follow. Punctuated by occasional brief periods of silence—in a fashion recognisably characteristic of Wandelweiser—the instruments play sustained tones that slowly wax and wane, sometimes several overlapping one another, often not.

Although the seven instruments are not an obvious combination in a septet, they are never called upon to play together as an ensemble and, hence, this instrumentation works very well in context. Together, the instruments provide a broad enough range of textures and timbres to create a varied, shifting soundscape. There is a pleasing logic to the way that the instruments enter and then fade away, ensuring the music never becomes overcrowded or cluttered, and so every sound can be heard clearly without being masked by others. Altogether, "One and Seven" makes a highly satisfying experience that stands up well to repeated listening. 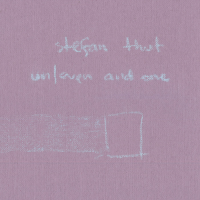 Glancing through the titles of Thut's scores, one reaches a point where the titles seem to become obsessed with "boxes"—"two strings and boxes," "one and three boxes," "five and three boxes..." and so on. No, Thut hadn't lost his marbles; he had become interested in the different ways in which a cardboard box could be employed—as table, as vehicle, as resonator, as amplifier, as percussion... While Un/even and One does not make specific mention of a box in its title, boxes do play a pivotal role in the piece, as can be seen on the YouTube clip, below, shot the day before the actual performance and recording of this CD. In the clip. Thut himself can be seen on cello, alongside Intonema proprietor and saxophonist Ilia Belorukov.

Thut's score specifies that, as preparation, the musicians should "on cardboard boxes of various sizes rub with one finger onto the surface of each box as if writing (longhand or print letters) and record each player writing his or her name from inside the box." At the performance, "the recordings are played back by an iPod and contact speaker attached to a large cardboard box." In the YouTube clip, this large box is out of shot but is being pushed right and left by Anna Antipova who is also playing back the recordings on iPod—hence, the sound that can be heard when no-one is obviously playing their instrument. In addition, the position of the box that Antipova is moving also determines which musicians play at particular times i.e. moving the box is a form of conducting; notice how the movement of the box stimulates the musicians to play...

Compared to "One and Seven," "Un/even and One" is a very different work—far more experimental, at times seeming to have some of the formal precision of a Beckett play. From the YouTube clip, it may seem that it is better seen live than heard on disc, as the silences and the sense of expectation they engender are as important as the sounds themselves. However, as an entity in its own right, away from the performance or recording of it, the CD recording does eloquently capture the experimental nature of Thut's score, with its sounds—and silences—conveying the piece's sense of ritual and mystery.

Taken together, these two recordings provide a fascinating snapshot of Thut's work and whet the appetite for far more.

Tracks: One and Seven