By DAN MCCLENAGHAN
May 5, 2017
Sign in to view read count 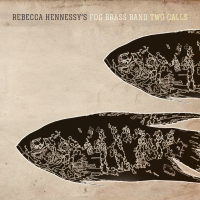 It's a one-two punch beginning that says this is a different type of brass band. And this dynamic group keeps proving it over the course of seven more diverse tunes. The instrumental combination isn't all that odd, but the way the individual voices are used—the arrangements—are out of this world: the modernistic, rock-inflected guitar, the tuba's deep throb, the angelic horn harmonies and the creative and virtuosic solos stirred up distinctively, more Henry Threadgill's Zooid at times than traditional New Orleans. If the question is: "Exactly who in this group is instrumental to its success?" the answer would have to be "Everyone."

"Lagoon" has a Bill Frisell filtered through funhouse mirror folksiness, with an interlude of Jay Burr's tuba sound underlain by Gill's spare, trinkling piano and a subdued clatter of the intricate rattling of Nico Dann's drums. The title track opens with—from a field recording—the twittering of Panamanian jungle birds, leading into a modern, mainstream groove. Scott's slashing guitar opens up "Snag." Unison horns make a bold statement, then trombonist Richards rants as the guitar bounces chords off his brass proclamations.

The set's closer, "Why Are You So Sad Booker Little," is Hennessy's ode to the melancholy sound of the American trumpeter Booker Little, who died in 1961, at the age of twenty-three. It features Hennessy out front, with a rich, sad sound on her horn, in front of majestic ensemble backdrop.

Two Calls is a uniquely enchanting recording. A wide-ranging yet coherent artistic statement. Credit Rebecca Hennessy's compositions and arrangements, the individual instrumentalists and their immersion in the group concept, and add a couple of nods to producer Jean Martin for the sound shaping and, on two tunes, the studio atmospherics added with the help of cellist/bandleader/composer Andrew Downing.