By DAN MCCLENAGHAN
October 13, 2018
Sign in to view read count 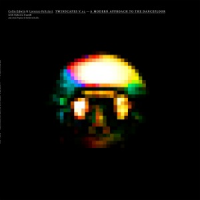 The cover art of Twinscapes Vol. 2: A Modern Approach To The Dancefloor features what looks like a cyborg, illuminated by hot electricity on the upper portion of its visage, a face otherwise surrounded by lifeless black. The image is fitting. The album's music—from bassists Colin Edwin and Lorenzo Feliciati—celebrates the dancefloor music of the '80s. A sound that, by its detractors, was often tagged sterile and mechanistic.

And perhaps it was, but then that was said of Miles Davis Filles De Kilimanjaro (Columbia Records, 1968), for the effrontery of bringing an electric piano into the mix. And if '80s pop and dance music did contain an element of sterility, it did indeed have its merits, and the sound did bleed over into other musical genres, including jazz, eliciting a reassessment by many.

With two bassists in the drivers' seats of a dancefloor-fest, grooves would be expected. They are delivered, in a set of ten soundscapes that at times evoke images of a dark club packed with writhing bodies, illuminated by a on-and-off flicker of a geometric flashing of bright lights. There are also dreamier moments, drifting, atmospheric, Brian Eno-esque reveries that take the sound into droning hypnotic territories. Gregorian-like electro-choirs provide expansive backdrops. Plugged-in bubbles burst. Cool ambient flows wash over the mesmerizing ritual grooves and metallic precision percussion.

In an exploration of an '80s sound, Edwin and Feliciati have crafted an impressively progressive music, with a prog-rock/fusion vibe. There's a sense that they have created an alternate world, a soundtrack for fifty years in the future, after the arrival of The Singularity and pervasive virtual realities. If that guess is correct, it's heartening to know the music will survive.

Tin Can; Severing Suns; Bedroom Corner; Future Echo; In A Haze; Precipice; Ghosts Of Tangier; The (next) Level Think; In A Daze; Heat Collision.