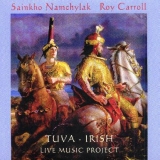 On the opener—"Hill Tara —Namchylak's voice, as so often, initially grabs the attention as she displays the lilting, lyrical aspects of her singing, rather than its harsher, more spectacular side. The piece also includes a recitation in Russian which, even if you don't understand a word of it, is beautifully mellifluous. It leads seamlessly into the next track—"Sligo —via some typical hard-edged vocal drones that are at once both soothingly mesmeric and somewhat discomforting.

Throughout these tracks, Carroll's contribution is all but unnoticed, as he provides the merest suggestion of background noises—just enough to prevent the voice being a cappella. Only on the third track does he come to the fore, laying down a throbbing low frequency pulse reminiscent of (if not actually played on) a bodhrán (Irish Frame drum). In truth, this is the first real sign of Irish elements in the music; thus far, the Tuvan has been more in evidence. But from here on, the album title is justified; Carroll produces a variety of instrumental sounds that conjure up the mood and feel of traditional Irish music, even though he employs decidedly non-traditional means including loops and laptop. His contribution is decidedly more understated than Namchylak's and takes longer to appreciate, but the two are definitely equal partners in the project.

Anyone who mainly associates Namchylak with guttural throat singing would do well to listen to the sheer pure beauty of her soaring voice on "Weariness has a name —and be prepared to be amazed. Yes, there are also examples here of her more extreme vocal styles, but they are largely integrated into a highly listenable whole. The most extreme vocals are on the aptly-titled "Anger, on which Namchylak wordlessly conveys the emotion of the title, to great effect; rising to the challenge, Carroll's accompanying sounds amply match the vocals.

The meeting of these two seemingly diverse musical cultures works well. One can only hope this album is not a one-off project, as its development promises to make fascinating listening.