'Mexican Green' should - and does - stand the test of time as a fitting tribute to a true giant of jazz. 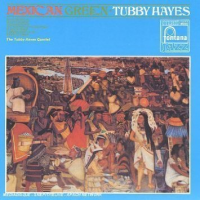 Recorded in February and March 1967 and released in the following year when in the USA the tectonic plates of jazz had already started to shift, Mexican Green was a tour de force recording for Edward Brian 'Tubby' Hayes. Actually it was a remarkable album for anyone to have made. Tubby Hayes was at that time the premier tenor player in the UK as was signalled by the polls he regularly topped in the (now sadly defunct) weekly Melody Maker. He had also gained something of an international reputation having recorded with the likes of Clark Terry, Roland Kirk, James Moody, Benny Golson and Paul Gonsalves and even deputising for an indisposed Gonsalves on one of Duke Ellington's UK concerts.

Whilst Coltrane had introduced the world to A Love Supreme and Miles was and on the road to Filles de Kilimanjaro and In a Silent Way, Tubby Hayes produced Mexican Green. This album was very far ahead in the evolution of jazz for a number of reasons. Hayes had a reputation as a hard bopper and fast player particularly on tenor, in which context he not merely excelled but was undoubtedly one of the world's leading musicians. He also was a virtuoso on flute and vibes. Born in 1935, Hayes had been a player of unprecedented ability since his teens when he had begun leading his own bands and his precocity had famously endeared him to the already well- established Ronnie Scott. Mexican Green had been preceded by several other albums recorded for the Fontana label in the 1960s that signalled true greatness; the best of which were Tubbs Tours, a big band album of original material and vibrant arrangements and a follow-up album 100% Proof which was simply stunning because although only the title track was a Hayes composition, the big band arrangements of predominantly standards such as "A Night in Tunisia leapt out of the speakers in a colourful, inventive and torrential arrangement of sound. The third major Hayes album of the 1960s was Mexican Green.

On the face of it, as a quartet album, a much more modest proposal. But this was not the case. This album was a quantum leap for Hayes in many ways. All the seven titles on the album were self-penned by Hayes, something he had not achieved before. Also, the album was reaching forward, progressing and moving in a way he had not gone before. The title track, the last one on the second side, was a conscious effort to embrace the free jazz movement, but without relinquishing his modern jazz roots. Although much of it was improvised it was sandwiched between a carefully constructed layer of 'tune.' It never waded far out into the sea of free, but kept a close eye on the coastline.

Nevertheless it was effective and not least because the three other musicians on the album were by this stage in their careers, superlative practitioners of their craft. Tony Levin on drums, Ron Matthewson on bass and Mike Pyne piano were all more than merely fine musicians. Sadly, Pyne, like Hayes, is no longer alive, but his piano phrasing was almost Tyner-esque in its resourcefulness. Levin's drumming was obviously influenced by Elvin Jones but had its own unique sound that incorporated considerable use of cymbals in a more Tony Williams style. But Levin was certainly no copyist and his style remains today as imaginative and powerful as ever. If more proof were ever need of this, listen to his playing on a slightly later album entitled cryptically, TCB, recorded in 1970 by one of Hayes' friends, the great tenorist Alan Skidmore. Ron Matthewson has always been a skilled bassist of great refinement characterised by rich sonority and inventiveness. He was later snatched up by the late Ronnie Scott and employed in many of his groups.

To take the remaining six tracks on Mexican Green in reverse order, "A Dedication to Joy is a paean to the singer Joy Marshall who was Hayes' girlfriend for a time. Hayes had previously entitled this ballad "When my baby gets mad...watch out! but this new title seemed more appropriate for its regal and sensitive feel. The previous track "Blues in Orbit is a bouncy 12 bar which acts as a sort of palate cleanser between courses of the weightier second half with the lighter but no less fertile first half. "The Second City Steamer , the final number of side one of the LP, is a crashing, tumultuous tune of frighteningly fast tempo that seems more to represent the speed of a jet plane than a steam train. This displays Hayes dexterity on tenor and is perhaps the most immediate of all the tracks in its instant identification of genius. "Trenton Place is a beautiful ballad showcasing Hayes' flute playing at its best. He was a simply fantastic flautist (he was also a consummate vibes player but had by this time begun to weary of having to transport it around) and it is a pity his tenor playing overshadowed his other talents. "Off the Wagon , in many ways a signature tune for the Hayes quartet, is a jaunty, humorous track which is easily his most memorable—and sing-able—composition. Had he achieved more widespread recognition or lived longer this could even have become a famous football chant.

It is however, the first track, "Dear Johnny B , dedicated to Hayes' late drummer Johnny Butts who tragically died in a car accident in his twenties, which defines this album. It is not just a question of the speed at which this track is performed nor even the dexterity of Hayes' performance but it is as though on this number at least, Hayes appears to take the tenor through the sound barrier normally restricting that instrument. He pushes the tenor so far and in such a fluid way that the timbre of the sax melts so that it begins to sound like another instrument entirely. There are very few occasions when this has been achieved; Jean Luc-Ponty managed to make his amplified violin sound like an electric guitar but this was due primarily to a bank of sound effects and high octane amplification. On "Dear Johnny B , an acoustic album, Hayes transforms his saxophone into something approaching the sound of an accordion played at very high speed. His lightning bravura playing never waivers for a second and is always on the button.

One word of caution about this album. It is better to expect less than more when first hearing it, because it is a slowburn recording. After several plays however, it is obvious that this is a truly remarkable achievement. It might seem heresy to compare it with Coltrane's Giant Steps but this is probably its nearest equivalent.

So just why is Mexican Green so important? It is certainly one of the most significant jazz albums recorded in Britain by British musicians. It was a landmark album for Hayes, who was already well-established as the premier jazz star of the UK. Everything about the album was right: all the compositions were written by Hayes unlike the choice of originals and standards that was the norm on his other albums, all the tracks were totally engaging, not all were high octane fast tempo numbers and there was a good mixture of slow, medium and fast tunes. The cover art was better and more colourful than any other Hayes album. There were extensive and informative sleeve notes by Hayes himself. The three other musicians were all first class players and complemented Hayes' playing perfectly. The album bore a much more 'modern' sound than had been previously evinced by Hayes and even bordered on free jazz in parts of the title track. Mexican Green pre-dated the Mahavishnu Orchestra's land speed record The Inner Mounting Flame by a good four years. Compare and contrast John McLaughlin's "Awakening with Tubby Hayes' "The Second City Steamer . One other crucial aspect was that the album gelled very successfully as a whole. In the Melody Maker jazz poll of March 1969, Mexican Green was voted only second place in the LP of the year category, behind the ten year old reissue of Stan Tracey's Little Klunk. This curious choice may reflect the fact that many listeners simply did not 'get' the Hayes' album. They may have heard it once or played a track or two in a record shop listening booth and thought it wasn't so special. Which demonstrates why it is essential to play it more than once or twice in order to appreciate where the Hayes quartet was coming from.

Although Hayes never achieved such heights again, he was, after all, only four years away from his untimely and premature death, Mexican Green should -and does -stand the test of time as a fitting tribute to a true giant of jazz.


Tracks: Dear Johnny B; Off the Wagon; Trenton Place; The Second City Steamer; Blues in Orbit; A Dedication to Joy; Mexican Green.

Dear Johnny B; Off the Wagon; Trenton Place; The Second City Steamer; Blues in Orbit; A Dedication to Joy; Mexican Green.