BY WOODROW WILKINS
November 8, 2007
Sign in to view read count 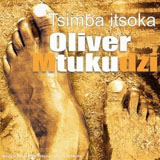 For better or worse, everyone leaves a mark on the world. That's the underlying theme of Oliver Mtukudzi's Tsimba Itsoka, which means "No foot, no footprint. Though only his second release since joining the Heads Up family in 2005, it's far from being a new thing for the Zimbabwe native.

Nicknamed "Tuku by his fans, Mtukudzi has been a force for political and social change through music for more than thirty years. His early career included some solo work, as well as being part of the group Wagon Wheels and, later, Black Spirits. Tuku has also branched into other forms of expression, including film and theater.

Part of the Heads Up Africa Series, Tsimba Itsoka is Mtuduzi's way of telling the world that whatever you do, positive or negative, you're going to leave a mark. Tuku is lead vocalist and acoustic guitarist. He is supported by a small ensemble. While the music is mostly tranquil, mixing reggae with laidback pop sounds, the messages are serious.

"Ungade we? (Would you like it?), despite its pleasant tone, urges violent criminals to look at the world from the eyes of those hurt by their actions. "Would you like it if your daughter was raped? "Chikara (wild animal) continues the footprint theme. With Samson Mtukudzi on soprano saxophone, the song explains how you can tell by the animal's footprints whether it is a dangerous predator.

The musicians and background vocalists are excellent throughout, but perhaps a bit more so on "Kuropodza (one who talks too much). Keyboardist Jairos Hambahamba is more involved, and drummer Bobby Mutyasira punctuates this conversation piece with effective use of cymbals.

Other tracks have equally powerful messages, including "Kuipedza (wasting), "Mbiri Hurimbo (fame is sticky) and "Kumiramira Nekumiramira (waiting and waiting). Tuku and his supporting cast deliver these messages with delightful rhythms and charming melodies. With Tsimba Itsoka, Mtukudzi leaves a positive footprint on the world of music.