By Troy Collins
February 20, 2007
Sign in to view read count 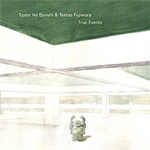 Duets can be among the most revealing of all jazz performances. With only two voices in the mix, there is nowhere for either individual to hide, so having a strong conversational rapport with one's partner is paramount. Between them, cornetist Taylor Ho Bynum and drummer Tomas Fujiwara share fifteen years of playing experience, and it shows on True Events.

Unimpeded by genre constraints, Bynum and Fujiwara incorporate all matter of inspiration into their purely musical dialogues, drawing from sources as disparate as the rhythmic cadences of hip-hop to the advanced improvisational strategies of Anthony Braxton.

Taylor Ho Bynum's previous album, the expansive Other Stories (Three Suites) (482 Music, 2005), showcased his impressive talents as a composer and arranger, but it left little room for his own solo excursions. Striking a balance in his discography, this intimate session documents a series of stirring duets with his long-term musical peer, Fujiwara. Bynum, an enormously talented soloist, balances virtuosity with expressive tonal effects, drawing an historical line from Lester Bowie to Cootie Williams. Fujiwara is a masterful colorist with a gift for roiling tribal polyrhythms. At their most focused, they invoke the spirits of Don Cherry and Ed Blackwell.

The session yields a plethora of timbral delights, despite the limited palette. Mixing a program of short, pre-written tunes with long-form pure improvisations, they balance the tuneful with the exploratory. Most of the short pieces rely on pre-conceived themes for their content. Sometimes the subject matter manifests itself in an obvious manner, like the playfully experimental "Akickitaround," based on the intricate musical gamesmanship found in Anthony Braxton's work. At other times the influence is more subtle, as on the atmospheric miniature "Biloxi/Ikuru."

Throughout, Bynum and Fujiwara play with sensitivity and abandon, frenzy and restraint, pushing and pulling structural dynamics every which way. The album's epic centerpiece, "The Emperor of Ice Cream," is almost fifteen minutes of unfettered expressionism. The piece is so subtly episodic and nuanced that one would be hard-pressed to guess it was totally improvised, so empathetic is the shared rapport. Building slowly from atmospheric cymbal flourishes to throbbing tribal patterns, whispered mutterings to splintered cries, the piece climaxes with the duo's most assertive playing of the session.

A fascinating counterpart to Bynum's previous release, True Events showcases a side of the up-and-coming cornetist which was undocumented on his previous album.

Visit Taylor Ho Bynum and Tomas Fujiwara on the web.