Marc Jufer: Trip To The Center 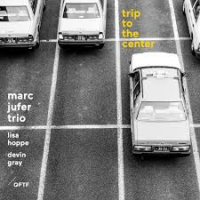 Swiss saxophonist Mark Jufer's Trip to the Center comes at you in a flurry of sharp, biting angles, presenting a free-form trio with a flair for twisting and turning on the whim and intuition of any of its three venturous inhabitants.

An excited tangle of themes and ideas recorded in two days, Jufer, elastic upright bassist Laura Schuler, Lisa Hoppe, and Luzius Schuler and the careening suppleness of drummer Devin Gray set the tone right away with "Symétrique Ascendant" and "Mrddg." Written by Jufer, the two tracks push and hover ahead of the beat, behind the beat, right on the beat and beyond as Jufer's tone sweeps from wavering sonics to deep, wandering breathiness. "Sick" flirts with time, or for the most part, no time as Hoppe enters behind Jufer with an aching arco while Gray examines pockets to stammer in and out of.

All nine compositions are credited to Jufer, but Hoppe certainly owns "Double Reverb" as evidenced by her quick witted, muscular hold of the piece. "Sigh" may echo "Sick" with its introductory, shadowy allure, but soon breaks into scatter time punctuation, each player taking the other to task. Hoppe again holds the center on "I Don't Know Why" proving European free-form may have been born from American experimentation, but discs like Trip to the Center and its inquisitive players take it to a whole other level.