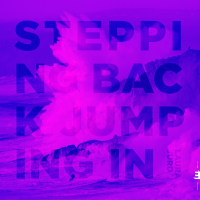 Laura Jurd's Stepping Back, Jumping In was commissioned by the major London music venue, King's Place, as part of its "Venus Unwrapped" series. Jurd debuted her project at the venue on March 1, 2019 followed by St George's Bristol and The Sage, Gateshead on March 4 and 5, 2019 where this album was recorded.

The tonal colour and eccentric rhythmic dynamics of Jurd's "Jumping In" instantly mark this as no ordinary event. The juxtaposition of spasmodic banjo, euphonium and strings vie for attention, with the added dimension of several discombobulating decelerando interventions, initially commencing within the first minute. Jurd's strident trumpet soon takes command backed by the ensemble and sporadically clattering twin drum kits. The repeated identifiable characteristic of the composition is a bluesy three-note arpeggio which is occasionally reversed. There is also the subtle addition of santoor which is (arguably) the East's answer to the West's banjo. But crucially both are possessed here of the element of surprise. As the title suggests, the album is bookended by "Jumping In" and its companion piece "Stepping Back" both written by Jurd. This final number begins with restrained strings and piano before graduating to Beatles-like electronics and another three-note motif, this time descending. But it's undoubtedly Jurd's use of a wide tonal spectrum that is extraordinary.

Jurd contributes just one other number here, "Jump Cut Shuffle" opening with pizzicato strings which gradually accelerate in tempo and then decelerate. She then reintroduces the three-note arpeggio from "Jumping In," carried by the strings with a passing nod to Vivaldi's Four Seasons. The members of the Ligeti Quartet are used to the exigencies of contemporary music and Stepping Back, Jumping In doesn't pull its punches, but the quartet is more than equal to the challenge.

Elliot Galvin's "Ishtar" is inflected with Eastern sounding strings, again provided by the ever-resourceful Ligeti Quartet. Underpinned by resonant euphonium forays, banjo and strings appear simultaneously to both sharply contrast and complement each other. Santoor player Soosan Lolavar's "I Am The Spring, You Are The Earth" begins in mournful drone-like mode which continues amid tinkling keyboards, sonorous brass and dramatically escalating drums before resolving into a single monotone. Anja Lauvdal and Heida K. Johannesdottir's "Companion Species" begins with santoor in freefall whilst improvised sonic waves build-up to a catchy riff taken-up by the ensemble over which Jurd offers a relaxed, bluesy and satisfying trumpet solo.

Stepping Back, Jumping In is a gloriously outrageous body of work featuring, amongst others, Jurd's band Dinosaur, augmented by the string quartet and additional musicians. A special shout-out goes to Rob Luft, who, along with virtuoso Bela Fleck, has here restored the banjo to its rightful place as a serious contemporary instrument. This is a remarkable, albeit at times deliberately disconcerting, project and a leap forward in Jurd's ever-burgeoning canon that successfully combines jazz and contemporary classical music by virtue of her hugely fertile imagination and seemingly boundless vision.