By Doug Collette
August 5, 2007
Sign in to view read count 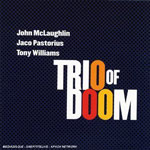 Trio of Doom was eminently qualified as a supergroup at the time of their formation. In 1969, drummer Tony Williams formed the prototype of jazz-rock fusion groups with his trio, Lifetime. Having entered and exited those ranks, guitarist John McLaughlin had gone on to form The Mahavishnu Orchestra, thus taking the mainstream acceptance of such music to another level altogether. Bassist Jaco Pastorius was vital in elevating Weather Report to rock band prominence when he joined that group.

It's no doubt intentional that the takes from the Trio's live performance at the Havana Jam in 1979 come first on the CD. The interplay is better defined than during their studio counterparts (recorded in New York a few days later). More importantly, the introductory drum solo by Tony Williams illustrates the intrinsic musicality in his playing.

In his liner notes McLaughlin, who oversaw the project, makes note of the decibel level during the performance, but it's the pastoral quietude of the late bassist's "Continuum" that is perhaps more noteworthy—it defines the dynamics of the Pastorius personality, as well as the collaborative effort that went into subsuming each member's identity to the whole.

Although, in the liner notes, jazz critic and journalist Bill Milkowski's essay initially refers to rock power trios as the template for the Trio of Doom (who's influencing who here?), the staccato frenzy and lightning quick turnarounds in the live "Prince of Darkness find their counterpart today in the likes of prog-rock influenced jammers Umphrey's McGee and nouveau-traditionalists Jacob Fred Jazz Odyssey.

Trio of Doom (named by Pastorius with customary eccentricity and humor) display a recognition of the simplicity of the blues in the easy shuffle of Williams' original "Para Oriente, which might serve the new generation well.

The general brevity of the tracks is perhaps inevitable given the multi-act concept of the label-sponsored concert from whence come these eighteen year-old recordings. Nevertheless, McLaughlin, Pastorius, and Williams didn't just jam for a half-hour, an approach they might well have been capable of given their collective wealth of technique. In both its live and studio renditions, "Are You the One, Are You The One? is indicative of each man's loyalty to composition as well as the spirit of truly working together to make this project a success.

Trio of Doom, the CD, may seem more insubstantial than it really is precisely because, as it stands, the music contained herein would barely seem to scratch the surface potential of this personnel alignment. Nevertheless, whether you find this package satisfying for its very existence or disappointing for its less-than-expansive results, Trio of Doom, the band, remains an exhibition of fundamental musical values in contemporary jazz. It will no doubt continue to be the launch point for fusion music (and beyond) that carries on for some time to come.