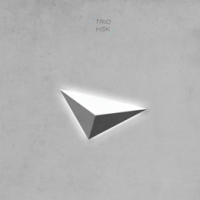 With just three tunes and 25 minutes running time, the self-titled debut recording from Trio HSK can never be accused of over-burdening the listener with the sheer quantity of its musical outpourings. Quality, however, is present in abundance.

The trio, based in Edinburgh, features the relatively unusual lineup of Richard Harrold's piano, David Series' electric guitar and Richard Kass' drums. The combination ensures that there's plenty of scope for experimentation and Series and Harrold ably cover for the lack of a bass instrument. Harrold has a contemprary classsical background, as performer and composer, Series and Kass have played with jazz and pop acts including The Drifters, The Platters and John Etheridge.

Trio HSK gives Wayne Shorter's "E.S.P." a dynamic reading. It's not without humor, too—the closing bars, where the trio slows down the tempo and engages in a series of false endings, form a light-hearted contrast to the tension created across most of the tune. Harrold gets the composer credit for the charmingly-titled "Stabfest." It's an apposite title, as the tune is characterised for much of its length by jagged, sudden, twists and turns. Series' guitar is at its spikiest here.

The first two tracks signal the arrival of a promising new band. Jerome Kern's "The Way You Look Tonight" hints at more, displaying the trio's musical strengths and also their imaginative approach to a Songbook standard. The number centers on Kass' gently funky drum grooves and features solos from all three musicians. The familiar tune filters in and out, serving as a starting point for explorations of melody, harmony and rhythm. A sense of hesitancy often arises from these explorations—which at times echo the sudden twists of "Stabfest." Deliberately or not, this hesitancy reflects Dorothy Fields' lyrics—the lady looks lovely, the singer is besotted, why shouldn't he hesitate when he's searching for a way to tell her?

Trio HSK may be short, but the three tunes have been chosen wisely—the modern jazz classic, the original and the standard—to demonstrate the band's range. On this evidence, a full-length Trio HSK album can be awaited with eager anticipation.