By Celeste Sunderland
October 7, 2004
Sign in to view read count 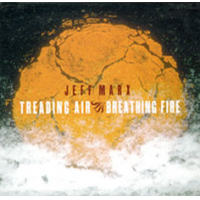 An album becomes an extraordinary work when it features playing that ventures beyond a category of art created simply to tickle the senses. Tenor saxophonist Jeff Marx' second album, Treading Air Breathing Fire , ponders metaphysical relations on an immense scale.

Most of the content takes the form of passionate dialogue between the four musicians, with Marx and pianist John Esposito leading the conversation with topics too intense for mere words. "Song of the Trees," the only tune not penned by Marx or Esposito, begins with an expansive introduction of piano and Peter O'Brien's drums that literally widens the magnitude of human reality. When Marx, who performed at Satalla last month with Reuben Hoch's Chassidic Jazz Project, plays a slow, deliberate melody over a frenzied piano, the sound seems to mimic the relationship of the planets moving through space at varying speeds, yet contributing to a single constant universe eternally in motion, forever expanding. Both Marx and Esposito have big, lush sounds and both play in a similar style, hashing out splats of notes interwoven with lustrous streams of consciousness that clench, not only with each other, but with O'Brien's drums and Ira Coleman's bass as well.

On the one live track, "Scare 'Em Stupid," O'Brien plays with a fantastically frantic aggression while Marx wildly churns out vibrantly diverse streams of notes. It's an Earth-shattering battle between horn and percussion that eventually simmers down to allow piano and bass to have their say. What they come up with is a dramatically intelligent debate containing a complex blend of time, meter and rhythm. When Coleman takes his solo we're reminded of the silent force of gravity and the beautiful stillness of dusk, as his skillful, clever voyage around the bass neck brings us back to a more Earthly state of mind.