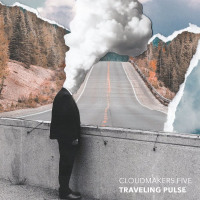 Vibraphonist Jim Hart has extended the reach of his Cloudmakers Trio which released three albums: AJMiLIVE #7 (2015), Abstract Forces (2014) and Live At The Pizza Express (2013), all for Whirlwind Records. Now the trio is augmented by reedsman Antonin-Tri Hoang and guitarist Hannes Riepler. But the trio's rhythm section remains constant with Michael Janisch on bass and Dave Smith on drums. Hart, who now resides in France, is a stalwart of the British jazz scene, having played alongside such luminaries as Sir John Dankworth, Cleo Laine, Kenny Wheeler and Stan Sulzmann.

The first two minutes of the opening track, "The Past Is Another Country," may imply that this is a totally free improvisational set, which it emphatically isn't. But behind the vibrant bass and drums, there's a pent-up force which gradually builds to a crescendo whilst never quite abandoning an innate harmonic structure. So when the ensemble theme kicks in, there's a palpable release of tension and the music, underpinned by the rock solid rhythm section, flows with boundless energy, courtesy of Hart's colourful vibraphone lines. Even when the sax and guitar are not playing, the vibes, bass and drums trio has an impressively full and engaging sound as witnessed in the central section of the hauntingly lyrical title track. "Golden" is an irresistible lullaby written for Hart's son in 2014, but with captivating group interplay throughout, it's far too involving a piece to fall asleep to and a million miles from "Golden Slumbers."

A two minute drum cadenza opens "The Road," and following the labyrinthine head it cedes to a repeated drum figure which dominates but gradually transmutes into a collective improvisation with, respectively, Riepler's raw mid-range guitar tone and then Jim Hart's searching vibes to the fore. The quietly subtle beginning of "The Exchange" gives way to a more robust tempo, its nebulous start miraculously coalescing into an irresistible section of ensemble themes. Hart's virtuosic soloing is again fascinating. On "Cycle Song (For J.T.)," which Hart has dedicated to the late-lamented pianist John Taylor, bass maestro Janisch opens with a typically lithe solo before evincing an almost familiar melody, in duet with the vibes, before it's taken up by the ensemble.

Travelling Pulse, recorded live at London's Vortex jazz club in March 2017, succeeds in conveying a sense of cognitive assonance where Hart's imaginative charts merge seamlessly with virtuosic extemporisation from all five protagonists. Hart is without doubt one of the best vibes players around, and this album, resplendent in eye-catching cover artwork alluding to surrealist René Magritte, denotes a high water mark in his career.

The Past Is Another Country; Traveling Pulse (Somewhere North Of Ghana); Golden; The Road (For Ed); The Exchange; Cycle Song (For J.T).