By John Kelman
November 2, 2004
Sign in to view read count 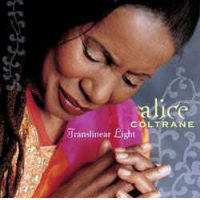 At its best, music is a reflection of who we are, where we've been and where we're going. It transcends classification and, instead, becomes something personal, a powerful force that paints a clear and honest picture of the spirit of the performer. While some artists are concerned with the mechanics of music, the logic of how notes and rhythms fit together in new and intriguing ways—and there's absolutely nothing wrong with that—others view music as more of a conduit, a means of giving a certain physicality to the incorporeal.

Alice Coltrane, whose life has been inextricably tied with her departed husband John, removed herself from the conventional music scene over twenty years ago to devote her life to pursuits of a spiritual nature. While she hasn't stopped playing music in that time, she has felt it unnecessary and perhaps even a little counterproductive to continue participating in an industry that has become more about product and less about pure musicality. Fortunately, her son Ravi, an accomplished saxophonist in his own right, has managed to draw her out of her more transcendent pursuits to create Translinear Light , a richly rewarding album of music that has little to do with music as an exercise in technique and more as a means of conveying deeper expression.

That's not to say there isn't a great deal of skill behind this programme that consists of original music, both composed and improvised, as well as a number of traditional spiritual tunes and two pieces by John Coltrane, "Crescent" and "Leo." The supporting group of musicians includes bassists Charlie Haden and James Genus, drummers Jack DeJohnette and Jeff "Tain" Watts, and Ravi Coltrane on various percussion, tenor and soprano saxophones; Ravi's brother Oran makes an appearance on alto saxophone. The level of musicianship and empathy is uncommonly high.

Alice Coltrane has always had a distinctive piano style that combines rooted knowledge with more spirited flights of fancy. And her use of Wurlitzer organ is truly unique. On the traditional opener, "Sita Ram," for example, she manages to make the instrument's reedy texture sound more like a Tibetan oboe than a keyboard, making the notes bend and twist remarkably. On "Jagadishwar" and "The Hymn" Coltrane creates resonant synthesizer washes that suit the tranquil ambience of both pieces.

Other pieces are, if not more conventional, more in synch with what some might expect from a jazz record. Her readings of "Blue Nile" and "Crescent" sound as if she has drawn a direct line back to the mid-'60s work of husband John. "Leo," where she again uses the Wurlitzer to create a surprising sonority, links more directly to the more outer-reaching free excursions near the end of John Coltrane's life, when Alice was an integral part of the group.

With Translinear Light Coltrane has created a work that honestly and unassumingly demonstrates the healing power of music, bypassing more intellectual concerns and instead going straight for the heart of the matter.