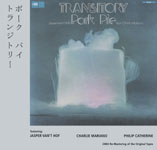 The second batch in Promising Music's series of remastered reissues from the MPS catalog kicks off with Transitory, an album that might have received greater recognition for its leader and his group had there been better distribution on the other side of the Atlantic. Keyboardist Jasper van't Hof has remained a relatively small piece of the evolutionary European fusion puzzle that was as (if not more) inclusive as groups including Mahavishnu Orchestra, Weather Report and Return to Forever.

Still, his group Pork Pie—revolving around the trifecta of van't Hof, woodwind multi-instrumentalist Charlie Mariano, whose Helen 12 Trees (Promising Music/MPS, 2008) was an underappreciated fusion classic when first released in 1976, and guitarist Philip Catherine—was as exploratory, electrifying and exciting as anything going on in North America and, 34 years after the fact, Transitory proves it. With bassist J.F.Jenny-Clark and drummer Aldo Romano, playing surprisingly outside what was, for the time, their norm—left-of-center mainstream and even further out free jazz— Transitory does, indeed, transition across a lot of territory.

Mariano's arrangement of "Pudu Kkottai"—a traditional North Indian song expanded into free territory while retaining ethnicity through use of bamboo flute and nasal double-reed South Indian nagaswarama—seamlessly fuses serpentine linearity with more turbulent undercurrent, harmonic density and a surprising blend of acoustic and electric instruments. Jenny-Clark's "Bassamba (Part 1)" is a freewheeling bass-drums duet that leads into Romano's "Bassamba (Part 2)," which refers more clearly to its namesake, a potent samba beat turned into something else by van't Hof's electric piano and Mariano's effervescent alto. Catherine's one solo spot is his own "Angel Wings," a dark Mahavishnu-like energy creating a modal backdrop for the guitarist's overdriven tone, juxtaposed with a paradoxically beautiful layered flute theme by Mariano that unexpectedly fades out.

The rest of the writing belongs to van't Hof, including the rock-inflected "Epoch," which sets the stage for Pork Pie's greatest differential. Few, if any, fusion bands of the time were using acoustic bass as their foundation, but Jenny-Clark didn't need 1,000 watts to create an energetic pulse; nor did Romano need a dozen rack toms to push forward with a perfect combination of groove, elasticity and unfettered freedom. At a time when keyboards and guitars ruled the day, Mariano's saxophone was a welcome contrast, while van't Hof's solo acumen and avoidance of synthesizers was refreshing, while never diminishing the group's potency.

But Transitory's high point is the two-part title track. Orchestral in scope despite limited instrumentation, van't Hof's strength as a textural player, comfortably blending impressionistic writing with freer concerns, is in full force. "Transitory (Part 2)" is a marvel of color and timbre—how Weather Report might have sounded in its early days had Wayne Shorter been a more assertive foil for Joe Zawinul's expansive arrangements. A minor classic finally receiving its due, Transitory proves that as American fusion was leading towards its inevitable implosion, a distinct lack of ego was keeping it alive and well elsewhere in the world.