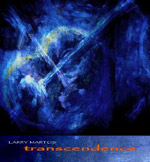 Solo recordings have to overcome extra hurdles in order to maintain listener interest. Single-line instruments like the saxophone tend to have the most difficulty because of their limited timbral range and inability to maintain an independent accompanying line. The piano is naturally the most flexible, allowing independent hands to work, but it also has timbral limitations. The guitar is in between—it can fake true contrapuntal lines, but it also can change its sound through electronics.

With Transcendence, Larry Martus has assembled a beautiful collection of original compositions for solo guitar. For the gearheads out there (meaning most electric guitar players of any stripe), a lot of different equipment was used in this recording. Martus lists a 1967 Gibson ES-335, a 1968 Fender Pro Reverb, and an "old" Fender Stratocaster (with modified electronics, of course) coupled with a 1956 (!) Fender Tremolux and a Roland JC-120 amplifier.

Martus is a gifted player who has transcended technical limitations. More importantly, he is also very sensitive composer, and the pieces here are very delicate, covering a wide range of emotions, but mostly on the introspective and intimate side. The music pulls you in, and you feel like he is playing just for you. Most impressively, Larry Martus has somehow managed to communicate his feelings directly through music.

If you want to listen to his technique, each piece emphasizes something different. Most impressive is his ability to keep a vamp going, or at least the feel of one, while playing a melody or improvisations. Although he does not play a walking bass line, Martus has the Joe Pass pick-plus-finger technique down cold, and he puts it to remarkable use in this music. Actually, his technique tends to fade into the background and serves only to help bring the music to the foreground. There is a lot to listen to from a technical perspective if you want, but then you might miss the music.

And as a musician expressing himself and communicating to the listener, Larry Martus is as good as it gets on Transcendence.

Until Then; Extensions; Quixotism; Adagio; Window of Your Soul; And So It Goes; Song for Christine; Ins and Outs; Soliloquy; Minor Details; Prizm; It